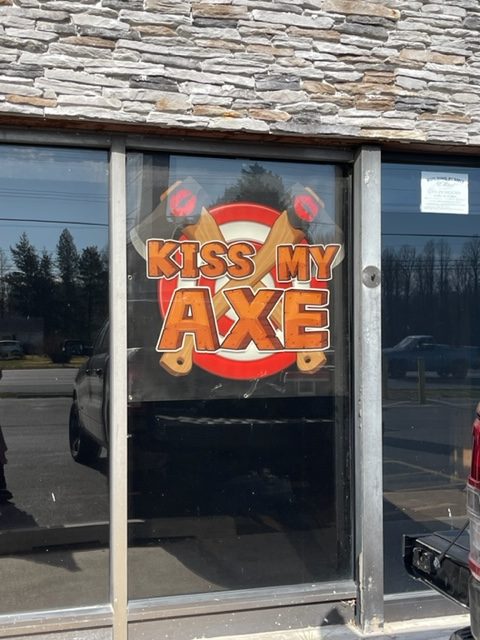 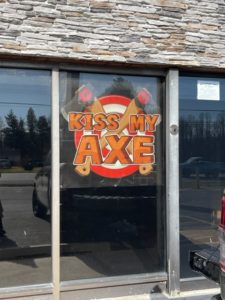 Kiss My Axe plans to open in early April

What began as a backyard activity that eventually grew into a thriving mobile business, Kiss My Axe will open its first brick and mortar location in Milford. Owner Scott Harris hopes the new location, next to EasySpeak on Milford-Harrington Highway, will be open the first week of April if all goes to plan.

“The mobile trailer’s success took me by surprise,” Harris said. “I just didn’t realize how accepted it would be. We’ve been all over Delaware, in DC a few times, Pennsylvania, Virginia, Maryland. But everywhere we went, people asked “Where is your shop?” I would laugh and say “You’re standing in it.” But the lights came on one day when I was here with Zack (King) when this spot was occupied by the gym. I said to Zack that the Kiss My Axe logo would look great in that window and he said they were looking for a tenant.” King and his wife are the owners of EasySpeak. 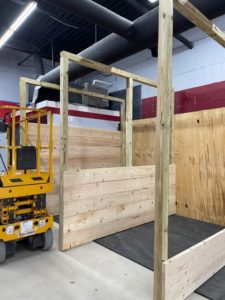 Kiss My Axe got its start when Harris was visiting a friend and the friend’s wife wanted to go axe throwing. It was late at night so they could not find a location that was open. When Harris woke up the next day, he decided to build something in his backyard. A few days later, he purchased a trailer and they began creating Kiss My Axe. The owner of Delmarva Powder Coating and DPC Fabrications, Harris and his friend, Brandon Henderson, spent nights and weekends creating a trailer interior they felt would make everyone feel comfortable, using burnt woods and bright colors rather than cold industrial designs they were seeing in other axe-throwing venues.

“On one end of the wall we will have five traditional target boards that are drawn on,” Harris said. “They will be lit with LED lighting and the entire space will have a club-like atmosphere. At night we can lower some lights and bring others up. There is video equipment, DJ system and speakers. The other end will have our digital target boards, something no one else in Delaware does. We have a duck hunting game where ducks fly around, and you try to hit them. We are still using the same axe, but this has a higher quality. We have a Zombie Attack and Tic-Tac-Toe axe-style is amazing. It just takes it to a whole other level, and it is probably the game my family plays at home the most. We have our Christmas tree games because I love themed games.”

Individuals are welcome to come in and try their hand at axe throwing and Harris plans to make the location available for parties as well. He explained that it is a great team building exercise. Outside food can be brought in for private parties or can be ordered from EasySpeak whose staff will bring it to the shop. Although they are a BYOB facility, they are not allowing outside alcohol but it may be purchased at EasySpeak and brought over to the axe-throwing shop. 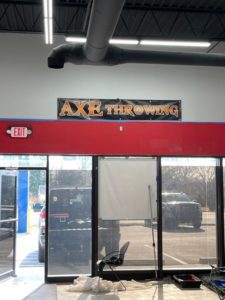 “It doesn’t take a lot of power to throw the axes,” Harris said. “People think you really need to be winging it, but you don’t. The axes are sharp but not razor sharp. We are using cottonwood which is a much easier for axe throwing. We are also using kiln-dried pine because cottonwood is not readily available around here. You can’t just go to Home Depot and buy it. There is a saw mill that does cottonwood in New Jersey and I am working with him. He gathers it up as lots are cleared so that it is still wet and soft when I get it. We keep it wet by spraying it every hour with water and a special solution that kills mold and mildew.”

In addition to the axe throwing games, Harris plans to install a few video games, including a punching bag game which he felt fit with the theme of his shop. He does plan a grand opening celebration once Kiss My Axe is open.