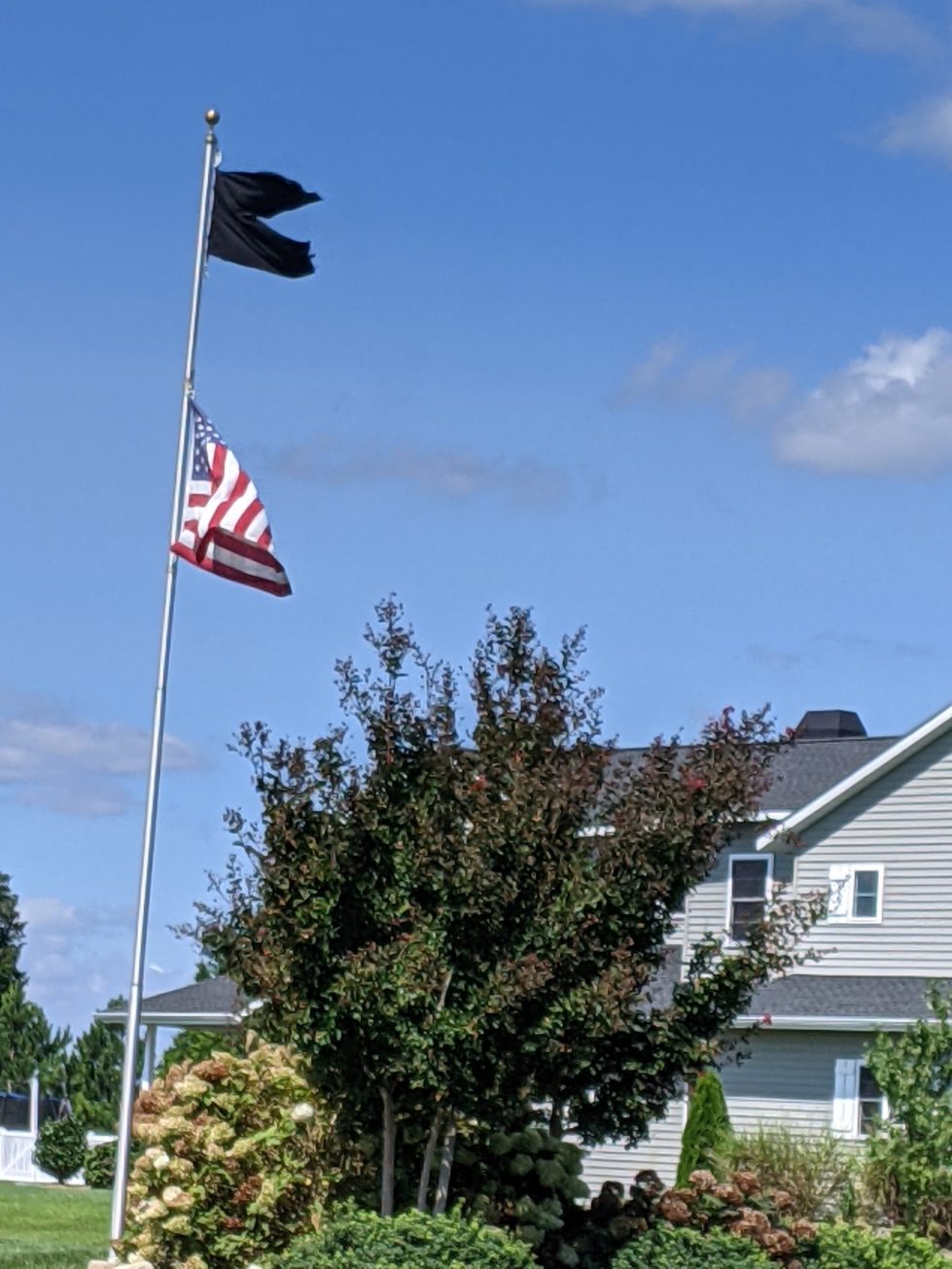 Lewes resident Harry Farreny says he will fly the U.S. flag this way for 13 weeks to honor soldiers killed in Afghanistan.

A Lewes man said he’s flying a pair of pants above the American flag in his front lawn to protest the Biden presidency and express his discontent with Biden’s handling of the military withdrawal from Afghanistan.

His neighbors — who are also Trump supporters — aren’t having it.

“The reason I hang that pair of black pants above the flag: I’m in protest,” Lewes resident Harry Farreny said. “I hung that up when Biden became president because I was mourning the death of our country and now I hung it back up because I’m mourning for the 13 that died.”

Farreny said he’d fly the trousers for 13 weeks — one week for each fallen service members.

His neighbor, Patricia Simelaro-Strey, wants him to pull his pants down. She said the demonstration is an act of “complete disrespect.”

If Farreny wants to mourn the fallen troops he should fly the flag at half-mast, she said, as she and her husband did for 13 days following the Aug. 26 attack.

“He feels that way but this is the country,” Simelaro-Strey said. “If he wants to put a sign up that says ‘the Biden administration stinks,’ I don’t care — it’s his lawn. But this is flying way above where anyone that comes into our development can see it.”

“Believe it or not, with politics, we’re on the same page,” she said. “I think our country deserves more respect and it shouldn’t have anything to do with his personal feelings on Joe Biden.”

When another neighbor complained to Farreny, he said he wouldn’t take the pants down because he’s flown the American flag dutifully his whole life.

If he could get a message to President Biden, Farreny said he’d tell the Commander-in-Chief “he didn’t win the election, he should resign and that he’s destroying the country.”

He said he got the idea for the act of dissent from the black ribbons that are often displayed to mourn fallen heroes.

His neighbors won’t have to worry about demonstrations like this for long. Farreny, who until recently was the community’s HOA president, is moving to Florida to be closer to family.

He said his resignation from the HOA presidency had nothing to do with the pantaloon debacle. He just wanted to give the community time to select a new leader for the group, he said.

In the meantime, Simelaro-Strey said she just wants the pants taken down — and one more thing:

“I think he owes the whole friggin’ development an apology,” she said.

Richard Santos, the state adjutant of the American Legion of Delaware, said Farreny’s display is a clear violation of the U.S. Flag Code but that there would be no way to enforce it because it’s a matter of free speech.

“The police aren’t going to come out or anything of that nature,” Santos said. “People can burn a flag and get away with it now. Over the years, it’s just gone downhill and this is a direct result of that degradation of respect for the flag.”

Santos said the flag is only supposed to be flown in the appropriate manner and never in combination with things that aren’t in good taste.

“You don’t hoist up a pair of ladies panties, you don’t put up a pair of trousers,” Santos said. “If he was my neighbor I’d be talking to him, that’s for d— sure.”