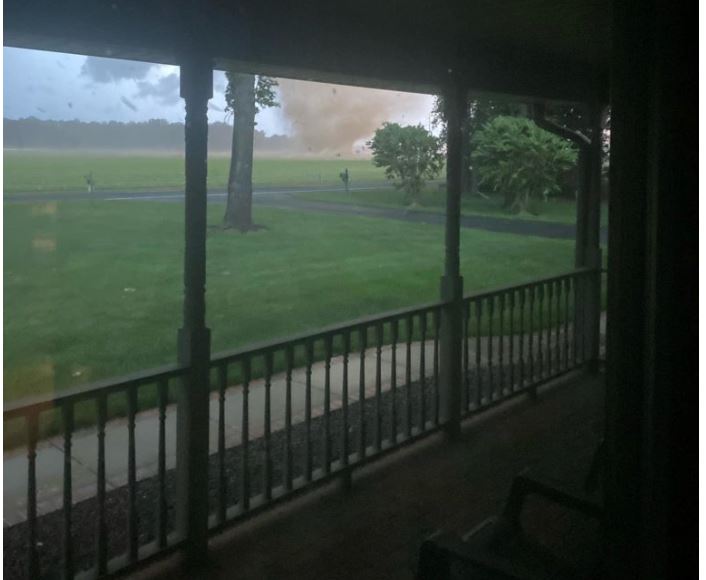 Ryan Moore shot this photo of the storm headed his way.

The Milford area continues to clean up after what the National Weather Service late Friday confirmed as a pair of F1 tornadoes Thursday spawned by a fast-moving thunderstorm.

Video and photos taken by those in the area of east of Milford showed what appeared to be a funnel cloud on the ground, while some report hearing what sounded like a tornado between Harrington and Felton.

At 11 p.m. Friday, the National Weather Service in Mount Holly, New Jersey, issued a statement confirming there were two tornadoes in Delaware.

The release said that on July 1, a broken line of severe thunderstorms moved into Delaware from the Eastern Short of Maryland.

One tornado followed a 4.77 mile path from just each of Milford to Slaughter Beach.

Damage was first seen at homes near the Cedar Beach Road and McColley Road intersection, where large branches and trees were snapped. Tree damage also occurred  across several residences because trees were uprooted, including a Shockley road porch being uprooted and insulation from the home being blown across the road.

Nearby a home’s antenna was bent 180 degrees toward the ground. Further east on Mills Road, several trees were snapped off in a  yard, one falling on an outdoor shed and collapsing it.

Near Fannies Way, a barn’s roof was blown off and two trailers were overturned. The tornado moved eastward into Marshland and then toward the intersection of Bay Avenue and Slaughter Beach Road. Another pole barn lost a lot of its roofing a a small trailer was overturned. The tornado then lifted near the Delaware coastline, where a peak wind gust was measured at 62 miles per hour.

“Survived a tornado and still managed to stay connected to my work call while running for cover,” Alex Huey who lives east of Milford posted on Facebook. “I can’t say I ever expected to have a tornado come through our neighborhood but thank you to family and friends who reached out to check on us. Despite some property damage on the road, I am thankful everyone is safe and sound.”

The second tornado, it said, came as “an embedded severe thunderstorm interacted with a sea breeze and remnant outflow boundary, generating a tornado that produced intermittent wind damage along a 3.9 mile path from Farmington to Houston, Delaware.”

It said damage was first observed on Farmington Road, where trees were knocked over. The storm then crossed a railroad track and cornfield before headed eastward  toward South Dupont Highway, where it caused damage to a business with a metal roof and blew down trees.

Once that tornado crossed the highway, a resident was damaged when a tree fell on the road and a cornfield was ripped up. A nearby wooded area was damaged, along with a house because of a downed limb. Power lines were knocked down and debris pour down on a farm across Hunting Quarter Road.

Throughout the Milford area, trees were down, some appearing to be uprooted while others seemed to have lost branches.

Alex’s father, Ed, who is a lieutenant with the Milford Police Department shared a photo taken by neighbor Ryan Moore, which shows an apparent funnel cloud traveling in front of his home.

Others reported seeing damage that looked like the path of a tornado along Route 1, heading toward Slaughter Beach.

A video taken by Matt McConaghy from the I.G. Burton car dealership on Route 1 also shows what appears to be a funnel cloud in the vicinity of the Huey neighborhood.

“Counting our blessings today,” Amanda Reynolds posted with photos of a very large, uprooted tree that fell close to their home. “God is good. No damage to the roof, windows or porch. Could have been much worse. Praying for our friends as they work through their damage.:”

The City of Milford announced Friday that they would collect debris from the storm and tornado touchdown through Monday, July 12. For pickup, residents must place debris on the curb inside and/or outside of the brown yard waste can.

“During the storm, the City of Milford lost electric service in several communities due to weather conditions,” said Sara Pletcher, Economic Development & Community Engagement administrator. “This effected primarily residential service, but also scattered instances of traffic signals and in one case, a sanitary sewer pump station, but without consequence. Power was restored by late evening but lost again in the early hours of July 2. As of 7:00 AM, it was fully restored.”

Questions and/or to schedule a storm debris pickup or to report downed trees that may threaten power lines, residents can call the City of Milford’s Customer Service Department at 302-422-6616.