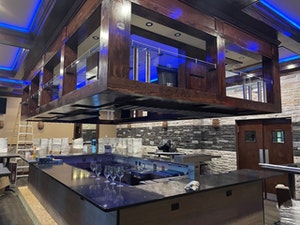 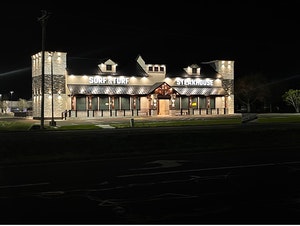 “All the furnishings have been here since last April,” Akoglu said. “We knew we could not open in April and even when we could open in June, it was only at 25 percent capacity. I didn’t want to open with that low of a limit. Then, we thought we could open in September, but there were rumors that the state would shut restaurants down again, so we waited.

Akoglu purchased the building when Bob Evans announced that they were closing the Milford location in 2018. 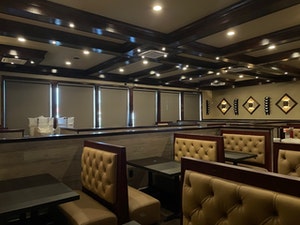 “I have always wanted a good steakhouse in Milford,” Akoglu, who also owns The Palace, said. “When we remodeled The Palace, we added “steak and seafood” to the sign on the front of the building because we do offer that on our menu, but I always felt Milford needed something dedicated to steak and seafood. When this location came available, I purchased it. I began doing a little research about steakhouses and learned that for a restaurant like that to succeed, you need to be able to seat at least 140 people and offer a bar. The Bob Evans building as it was could only seat 118 and there was no place to put a bar.”

Akoglu worked with an engineer to determine how he could expand the building. The engineer reached out to the City of Milford Planning and Zoning Department who told him he could expand the front of the building into the parking lot. Initially, Akoglu planned a basement in the new section to use as offices and meeting space, but he was told that since it was winter, it would be very difficult to dig a basement. Instead, the plan included a second floor which would provide the office space he needed and add to the aesthetic look of the building. 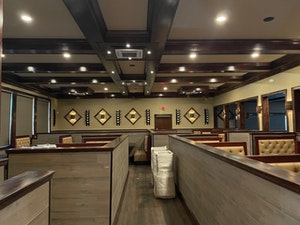 “The menu is completely different from The Palace,” Akoglu said. “We will offer steaks and seafood as well as a few pasta items. This is a prime location, and we think it will do very well.” In addition to an all-new menu, the interior of the restaurant is elegant, looking nothing like the former Bob Evans. Akoglu has doubled the size of the kitchen with one section dedicated to providing food for the bar.

Currently, Surf & Turf is hiring for all positions, both front and back of the house. Akoglu stated that he was looking for wait staff, bussers, kitchen help, hosts and managers. He also explained that he is hiring both experienced and novice restaurant staff, offering training to those who have no experience.

“We are ready to open, but I can’t do it short-staffed,” Akoglu said. “We need to get our staff where it needs to be and we can open the doors.”

Anyone interested in applying can stop at The Palace to pick up an application. There will also be someone at the new restaurant each day, which is located at 947 North Dupont Boulevard, so anyone who wishes to apply can stop in there as well.