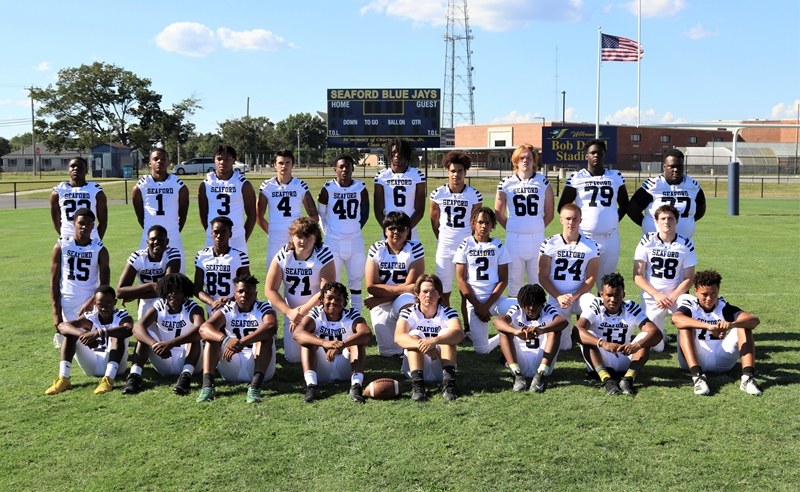 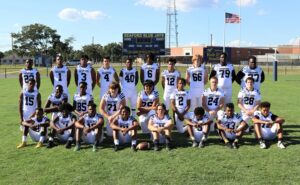 Seaford – At the end of Seaford football’s two-week summer camp, head football coach Mark Quillin looked across the field as 50-plus athletes gathered for a team photo.

“It has been great to see the program grow over the past two years,” Quillin said. “Actually has caught me off guard this season.  Luckily, having coached at Tech for 10 years I am able to organize the practices to maximize the players growth.”

Quillin says having such an increase in players this year has helped save the program.

“We are able to compete and grow,” he said. “Winning is always important but the excitement of competing with a level opponent each week makes football fun.  Also gives us a chance to get our feet back under us.”

When Quillin took over the reins at Seaford in 2020, he could not see Covid-19 on the horizon.

“Covid was a tough way to start turning the program around,” he said. “Football is about relationships and without being able to spend time with each other it really set us back a bit that first year but we have rebounded nicely.” 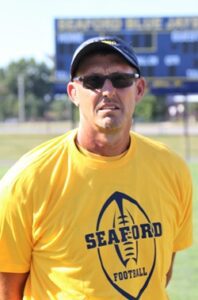 The 2021 season saw the first year of the state’s reclassification. Seaford was moved to Class A. Schools were grouped on a formula based on enrollment and win-loss records over a five-year period.

Last season the Blue Jays finished the regular season with a 7-2 record and qualified for the Class A state tournament, where they lost to Tatnall 15-12.

Quillin said the kids were disappointed in their exit, but teams and players have to learn to win.

“Each week matters and every inch counts, on the football field and in life,” Quillin said. “Our motto this year- 2 pains in life- Pain of discipline or pain of regret.  We need to be more disciplined on the field and off. That pays dividends in life.”

Quillin left Sussex Tech in the spring of 2020 and headed to Seaford with a plan.

“Clint is an icon for Seaford football,” Quillin said. “He truly loves the school, community and our kids.  He also has a passion for football.”

Dunn, a Seaford graduate, played under legendary coach Ron Dickerson from 1987 to 1989 and was selected first team all-state on offense and defense. He headed to James Madison University, where he played linebacker for the Dukes from 1991 to 1994.

Now, Dunn said, “I still get the same butterflies walking up those steps from the Pit for pregame today as I did 30-plus years ago as a player.”

Dunn says he and Quillin had talked about Seaford for many years while coaching at Sussex Tech and felt like if given the opportunity they could turn things around number-wise.

The number of players more than doubled at Seaford their first year and has continued to increase. 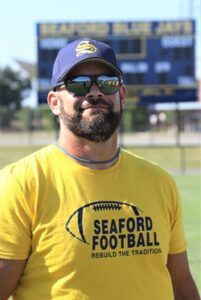 “The kids have been incredible and a pleasure to be around and coach,” Dunn said. “Seaford is a great community and it has been wonderful to see the enthusiastic support given as we’ve been working the last couple years.”

The players on the current team weren’t even born when Seaford was dominant in state football.

Quillin credits Dunn with having the passion for the community and football to help connect them to the past.

“There is certainly a fine line between embracing a past they are too young to ever relate to versus helping them understand their role in rebuilding the tradition that Seaford football represents,” Dunn said.

Dunn says that The Pit plays a role in connecting the players to the past. All of the program’s past conference and state championship banners are kept on display.

The Blue Jays will start their season on the road against Maryland opponent Colonel Richardson on Friday, Sept. 2.

Quillin says leadership from his upperclassmen will be key this season.

“No player has stepped up to be ‘that’ guy,” Quillen said. “We are still learning to be a ‘program,’ but our quarterback Careen Boulden has to be our leader on offense.”

Quillin was appointed athletic director at Seaford last winter so he is dealing with the growth of the program on two levels, coach and administrator.

He now has to deal with finding field space so the surge in numbers has some place to practice, as well as a middle school team.

He also credits his coaching staff for the quick growth of the football program.

“All my coaches are special in their own way. A lot of our success is because of them,” Quillin said. “Most of my staff are in the building and support our program and kids.  I am lucky to have such a great staff BUT most importantly they are all great fathers, husbands, sons etc.  Gives our kids someone to look up to too.  It is what makes the biggest difference.”

It has been four decades since Seaford last won a state championship in football. The team last won a conference title in 1994.

But while the Blue Jays continue to get back on the winning track, Quillin is focused on building the individual as well as chasing success for the program.

“Every coach of every team wants to win the state championship but building champions for life is the most important task we have as coaches,” he said. “A coach can impact so many lives along the way.”