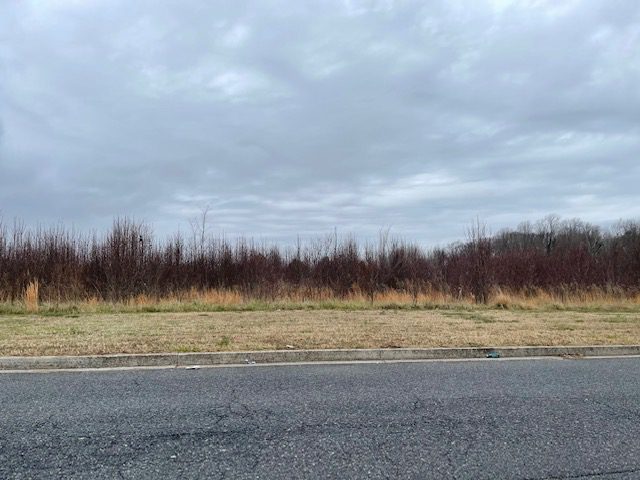 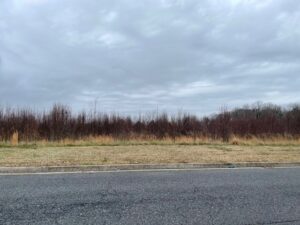 UPDATE 12/23/22 – Sara Bluhm of the City of Milford announced that, thanks to the efforts of Mayor Archie Campbell, any of the residents of Tent City who do not stay in a Code Purple shelter this evening will be housed at the City of Milford Public Works. Additional updates on this story will be provided after the holidays.

Earlier this month, off of East Masten’s Circle, was sold to a developer who plans to build warehouse space. Unfortunately, the land has been the site of Tent City, a homeless encampment, for several years. The new owner plans to clear the land in early January, requiring the relocation of the homeless population who reside there, according to Martha Gery, CEO and founder of Milford Advocacy for the Homeless.

“It is with a heavy heart that I need to share some disturbing news this morning,” Gery wrote on the MAH Facebook page on Tuesday. “Yesterday afternoon, we found out that the property where Tent City is located has been purchased and will begin deforesting and putting up fence on January 7th. This means on January 6th, 40 or more people who are citizens of Milford and already displaced will once again find themselves without shelter. I chatted with them yesterday afternoon to let them know what is going on. There were tears, sadness and despair on everyone’s faces.”

Gery stated that she called Mayor Archie Campbell and Vice-Mayor Jason James as well as Sara Bluhm, Economic Development and Community Engagement Administrator for the City of Milford. Gery stated that Mayor Campbell did not have any immediate solutions. The city has always maintained that Tent City was likely a temporary solution as it was private property. Gery agreed that she had always warned the residents that they were squatters and that they could be evicted at any time.

“When I spoke to Sara, she pulled up the parcel and told me the city believed Tent City was located on a different plot of land, where the solar panels were located,” Gery said. “She said, “with the solar panel company located out of state they didn’t know they were there.” Now, the entire parcel where Tent City exists will be deforested and they are going to put up fencing around it.”

When she learned about the land sale, Gery explained she put the city on a 24-hour notice to think about what they wanted to say and do, stating that although these people were homeless, they were citizens of the city and constituents of the mayor and council. She praised Councilman Jason James for reaching out to the landowner and explaining what was happening.

“Jason talked to them and convinced the owner to give us another week,” Gery said. “Now it is January 15 they plan to deforest, so they have to be off January 14, which is better. The owner said he was sorry, but he would incur all kinds of costs if he delayed any further. He’s allowed to do his thing; it is his property. But I figured it was better to ask because he is part of this community now. I don’t know if he is new to the community or whatever, but he’s now a property owner in this community and maybe he didn’t know there were squatters on his land, but there are.”

According to Gery, Councilman James has been very involved in the plight of the homeless in Milford, holding roundtable discussions and following up to see if things were improving. Gery stated that as soon as she told him what was happening, Councilman James was on the phone trying to find a solution, reaching out to Governor John Carney and Lieutenant Governor Bethany Hall-Long’s offices. They also reached out to different legislators who have provided lists of organizations and state offices that may be able to help. The issue MAH is facing, Gery explained, is that it is the holiday season, and everyone is either busy with holiday preparation or heading out of town. Currently, she is seeking vouchers similar to those provided during COVID for hotel rooms.

“All the tiny home and pellet home projects council has talked about are on hold until Georgetown’s is up and running,” Gery said when asked about the projects. “They want to see how it works out in Georgetown. So, there’s nothing that is going to happen there any time soon. Right now, we are not getting a lot of help from the city to help these people. We’re an advocacy group and we will continue to advocate for them, but they are citizens. Yes, they are homeless, but they are still part of this community. I have told people not to pick on this new owner, they did what they are supposed to do, and we always knew this could be an issue. But it is a city and state problem. We just need them to figure out what to do as a temporary solution until a more permanent solution can be found.”

She pointed out that she is currently helping people who, two months ago, were helping MAH, but now they are displaced due to the lack of affordable housing in Milford. Gery believes that landlords could lower rents, but many are unwilling due to the loss of funding many incurred during COVID. One thing she believes would help is an ordinance that would require developers to set aside a percentage of new houses or apartments in new developments for low income housing.

“What I am calling on them to do is integration, to not make low income housing separate,” Gery said. “When you separate people, you are automatically asking for trouble. You’re asking for problems in so many different areas. But if you integrate everyone into different pieces of society, I mean we all know there have always been haves and have nots, but if you put them together, you have a more solid community because everybody feels they belong and they’re treated the same instead of different. It has been done in other areas, but I don’t have the specifics of it.”

Gery suggested that although the city cannot tell a landlord what to charge or a developer what type of housing to build, there could be ordinances that required 10 or 15 percent of the new construction to be set aside for low income families. The developer could choose how that was managed, whether through federal Housing and Urban Development or the state housing office. One of the things Gery is concerned about is the domino effect the closure of Tent City could cause.

“If we don’t find a place that puts everyone in a concentrated area, there’s a lot of things that can happen,” Gery said. “For one Brandywine Drop-In Center and Clinic may not be there anymore because there’s a concentrated population nearby and if people cannot get to them, that’s a problem. That means we lose the one resource we have for people to get showers and get warm. I am very concerned about that. The other thing is, if people are dispersed like this, you will have people who are more desperate, because it will be harder for us to get food to them. Even if we do know where they are, we don’t have a vehicle to run all over town to be able to do that.”

MAH is currently trying to contact DelDOT about the possibility of a donated van. She understands there is a program where vans taken out of service are donated to non-profits. That would help MAH manage the homeless population should it be dispersed throughout the area. She is also concerned there will be more complaints about people hanging out in Bicentennial Park as they will want to be close to places to get food or other basic items. This could lead to a rise in vandalism and thefts, something that has been reduced since MAH began working in Tent City to provide many of the needs of that population.

“The police have told us statistics for some of the things related to homelessness have been reduced because of what we did in Tent City,” Gery said. “That’s all going to be on the rise again, so anyone who thinks “oh, well, it’s not me, it’s just the homeless,” there are going to be more homeless downtown. If people don’t like the panhandling, they’re really not going to like what’s going to happen next if we can’t find a solution for them.”

Several agencies and organizations are working with MAH to try to find a solution, but many of these are years down the road. One organization is trying to purchase property to place either tiny homes or pallet homes, but Gery knows that is a long term solution as it will require purchasing land, going to settlement, finding people to build and funding the entire project.

“Right now, we have people in Tent City who are working full time and need to get back and forth to work,” Gery said. “They don’t have vehicles, so they need to stay close to places where they work, many of which are near the current land. What we are working on is to see if someone will donate a large house or a vacant small business building so we can coordinate a place for them to go. At least if they have to be someplace else, we can get them transportation to a job, to interviews, to appointments or whatever.”

MAH planned to submit a grant to the Lion’s Club for new tents, small heaters and propane, but they are now requesting funds for vouchers for hotel stays. They are also reaching out to local organizations and businesses to obtain funds that would allow the residents of Tent City to have a place to go.

“This is really going to take a village, a community, to do this,” Gery said. “If we all pull together, we can find a way to help these people.”

Anyone who wants to help with relocating those in Tent City can reach out to Gery by calling 302-643-2470 or email her at [email protected]. More information about the organization can be found at http://milfordadvocacyfrothehomeless.org.