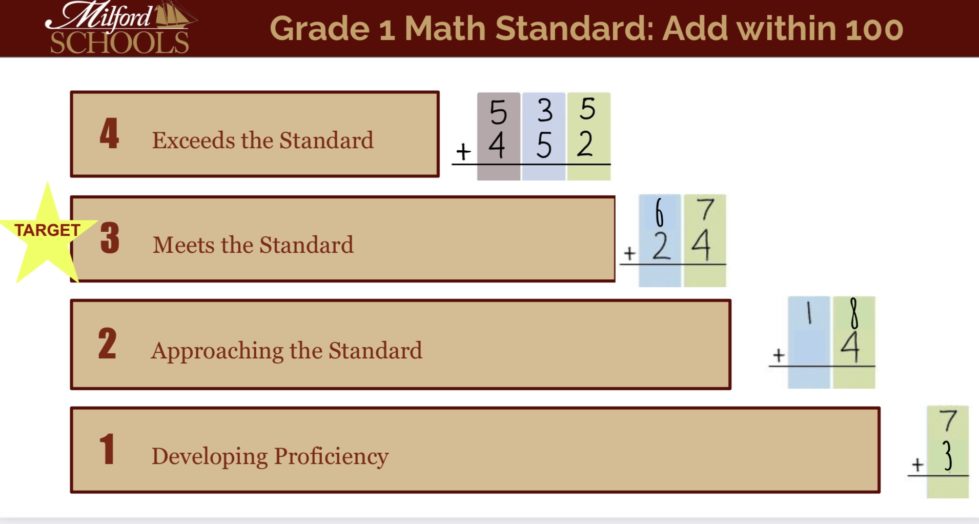 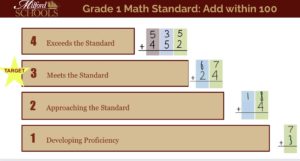 If the MSD Board of Education adopts a new report card system, this is how parents can interpret a typical first grade report card

After receiving feedback at a previous board meeting, Milford School District has decided to scale back the rollout of a new standards-based report card system. Initially, the district planned to begin using the new format for grades Kindergarten through sixth but have decided to only use the system for kindergarten and first grade for the upcoming school year.

“We would look at how that would continue to roll as we move forward, and then our intent is to also bring up the board policy for a first read at the June meeting, as we look to revise the grading policy, which is indeed in need of updating as we move into the next academic year,” Dr. Bridget Amory, Director of Student Learning, said. “There have been some modifications made to help with any type of clarification based on our discussion from the last meeting. We do indeed have content standards that we are instructing. We are using curriculum and instruction that is aligned to those standards, as well as offering assessments. What we are still in question is how we’re reporting that out and that goes back to the question mark around the report card.”

“In the traditional percentage-based grading system that we have used, students start with 100% and as they work through their assignments, their grade potentially drops from 100 as they make mistakes. With a standards-based report card, they can work kind of upward as they’re working toward that,” Dr. Amory said.  “Students can see themselves making that progress as they move through the system. This is again another analogy to help with the comparison between the traditional grading. So, if you were to take your vehicle to a mechanic, and the mechanic said, ‘Hey, I’m going to give you a score of a B-plus. What they aren’t telling you is all of the details that you would see, as indicated in the standards-based report card, where you would actually see the components of each one of the pieces of your vehicle that actually need to have the work done or if there’s something is performing well within your vehicle.” 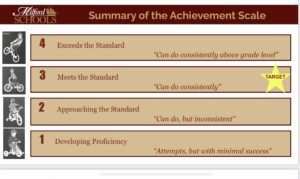 There is a kind of “brain fog” involved in traditional grading methods, Dr. Amory explained. A student who does well on a test but needs some work on an essay may have the same grade as someone who scored well on a test but did poorly on an essay. This can be confusing for the student to understand where they may need improvement or where they are excelling. Students with special needs who may have a 504 or an IEP as well as those who were multilanguage learners would have the same targets but their methods for achieving the target may be different. Dr. Amory explained that the piloted report cards would include the option for parents to provide feedback. She also stated that the district had worked with other districts, including Smyrna, who were using this type of report card system.

“I would like to make a quick comment. I was particularly harsh at our last meeting, and I very much appreciate the changes that you have made to this. This looks much better, at least from my personal perspective,” Dr. Adam Brownstein, a member of the board, said. “If I can make one or two quick comments, where you have the yellow star with the target, I actually think this presentation is better served without those yellow stars. Because the subtle implication gets back to the point that I was making previously, which is we want every student here to exceed the standard. We don’t want every student to simply meet the standard and by labeling a “C” as the target, I don’t know that that does a service to our students. And the PowerPoint would be just as easily served and the point would still be made without doing that. So that’s just a construct. But that’s me personally.”

Dr. Brownstein also asked if it was possible for both grading methods to be used as the new method is piloted.

“My other comment is from a logistical standpoint, and again, I’m not a teacher. I don’t know how difficult it’s going to be. You mentioned before the teachers are starting already using this with like certain curriculums and stuff,” Dr. Brownstein said. “What I see is the most robust way of delivering this is, frankly, to do both because in some ways we’re already doing the legwork for that behind the scenes. For instance, the car example is fantastic, that’s great. So why not give them both? Why not say you have an 89 and then this is the breakdown of good, bad, whatever and that way you’re giving them both, which will then help them when they eventually transition out of this system because I do think eventually, we’re going to implement this with grades K through five at some point. By them having both of those that would make any future transition more seamless because they would be used to see both of those things. It’s sort of the best of both worlds. You get the number grade, but you also get the feedback and then individual category and whether or not you’re meeting expectations. I don’t know how much more work that would be for teachers. And certainly, I don’t want to make something onerous when it doesn’t need to be. But that would be a way of splitting the difference, so to speak. So those are my thoughts. Thank you and I very much appreciate the work that you put into this in the last month to make it this way.”

The new report card system for kindergarten and first grade will be brought to the June board meeting for members to have a first read of the new policy and may be added to the July meeting for adoption.