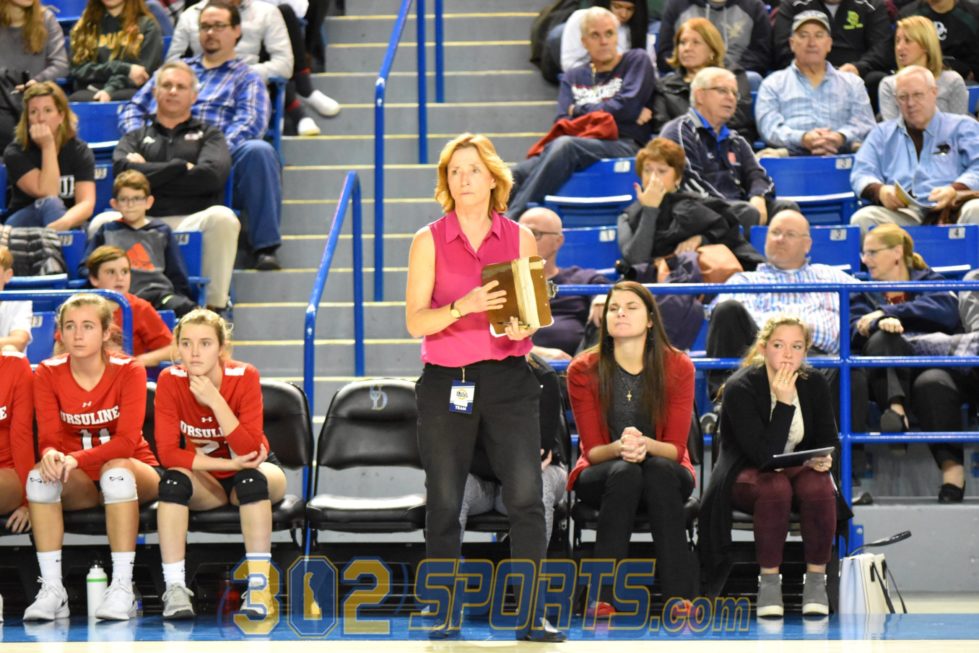 The tournament also closed the chapter on the coaching career of Susan Heiss at Ursuline Academy in Wilmington. Heiss guided Ursuline to 11 championships and 23 semi final appearances, both state records. She announced her retirement from her 40 year run as coach and athletic director, a post she has held for approximately 30 years.

Heiss was named 2021 “Coach-of-the-Year” after leading the 14th seeded Raiders to an opening round win over Appoquinimink, then a straight set victory against 3rd seed Red Lion, before falling in the quarterfinals to Wilmington Friends.

Sue Heiss graduated from Woodlawn High near Baltimore and continued her education at The University of Delaware while also playing volleyball for the Blue Hens and legendary coach Barbara Viera, a mentor that she would learn valuable knowledge about coaching the sport.

“I went to Delaware and I didn’t play a lot, but I sat next to Barb Viera during the games. So, I learned how to coach from her, and what to watch for.”

Coach Heiss coached at Delaware Technical and Community College and St. Elizabeth High School before taking the job at Ursuline in 1981. She was asked to coach track and field along with volleyball. She didn’t know much about track and field, but that experience did lead to her meeting future husband Ralph Heiss. They were married in 1986 and have four sons spread throughout the country. Ralph retired last year from Salesianum, so the two will now plan on traveling to visit their sons and families.

Her first state championship came in 1993 at Ursuline. The Raiders would repeat as champs in 1994 and again in 1997. Under Coach Heiss the program would go on an “epic” run, winning 7 state championships in a 9-year span between 2002-10. The two years the Raiders didn’t win the title were very close matches against St. Marks. Then, after an eight year dry spell, Urusline delivered Heiss’ 11th and final state championship in 2017. “That team wasn’t particularly tall, but we had a very good defensive team. They played exceptionally well together throughout the tournament”.

Heiss has witnessed some changes at Ursuline during her tenure. The school added Serviam Field earlier this century, giving most outdoor sports a home. Before that, they would have to rent fields or use public parks. Laffey-McHugh Gymnasium used to have a rubber surface, but a donor made the current wood floor possible. Another donor provided for the retractable bleachers.

Heiss thought about retiring last year when her husband did, but having to deal with the coronavirus pandemic took some of the joy out of the season for her. She was so busy filling out paperwork and monitoring health plans that she couldn’t spend the time coaching that she would have liked.

“It’s just wonderful. I had a nice team this year. The parents were wonderful. The administration, so supportive. The team has given me everything I wanted this year.”

Of course, being at Ursuline at the same time as Elena Delle Donne, arguably the best athlete ever to come out of Delaware, we had to ask Coach Heiss about her memories of those years. Elena Delle Donne was playing basketball (and one year of volleyball) for the Raiders. The team was nationally ranked, and they had a spirited rivalry with St. Elizabeth, which had its own star in Khadijah Rushdan. The teams played each other twice a year during the regular season, and bedlam surrounded those games. They also faced off for the state championship every year between 2005-08. The Raiders won three of those.

High-profile college coaches would be in attendance, including Geno Auriemma of Connecticut and the late Pat Summitt of Tennessee. At one point, all five starters for Ursuline ended up playing Division I college basketball.

“It was fun. The attention that boys sports get, it was like 100 times more with this girls sport, and it was well-deserved. People were coming from across the community and across state lines. They had no connection to either when it was St. Elizabeth and Ursuline, Khadijah and Elena, but they wanted to see good basketball,” she said.

Longtime Head Volleyball Coach at Charter of Wilmington, Dave Stover also retired at the end of this season. He and Heiss have a ton of respect for each other. Stover said, “She really teaches the kids the fundamentals well, she is a fierce competitor…she has more finals appearances and titles than anyone…that is a testament of how good she is as a coach and motivator.”

“A lot of the last-time moments are starting to hit me,” Heiss said. “I’ll miss being with those athletes every day at practices, and the everyday planning…I’ll miss their families, and I will miss the competition.”