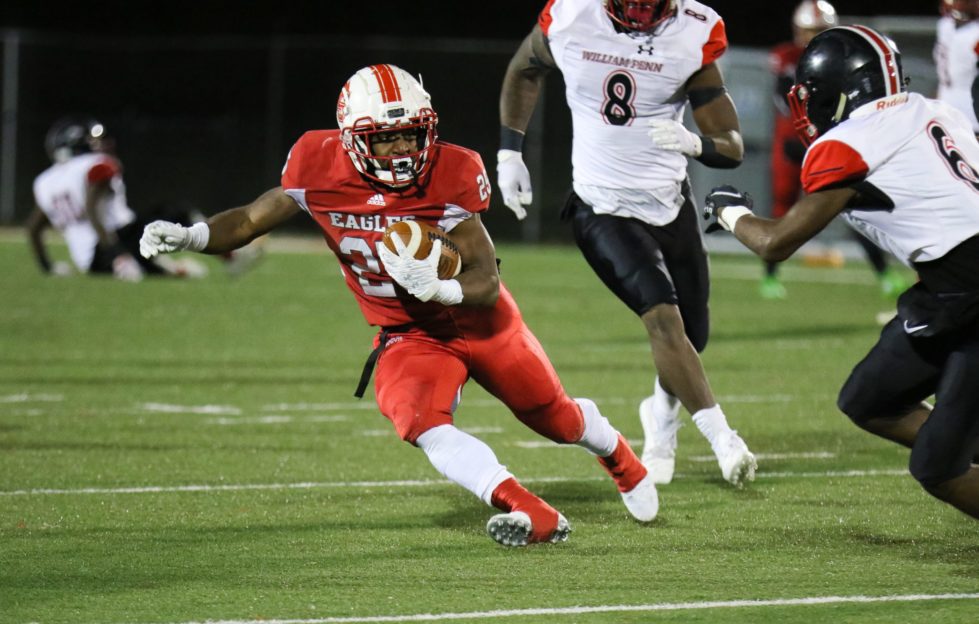 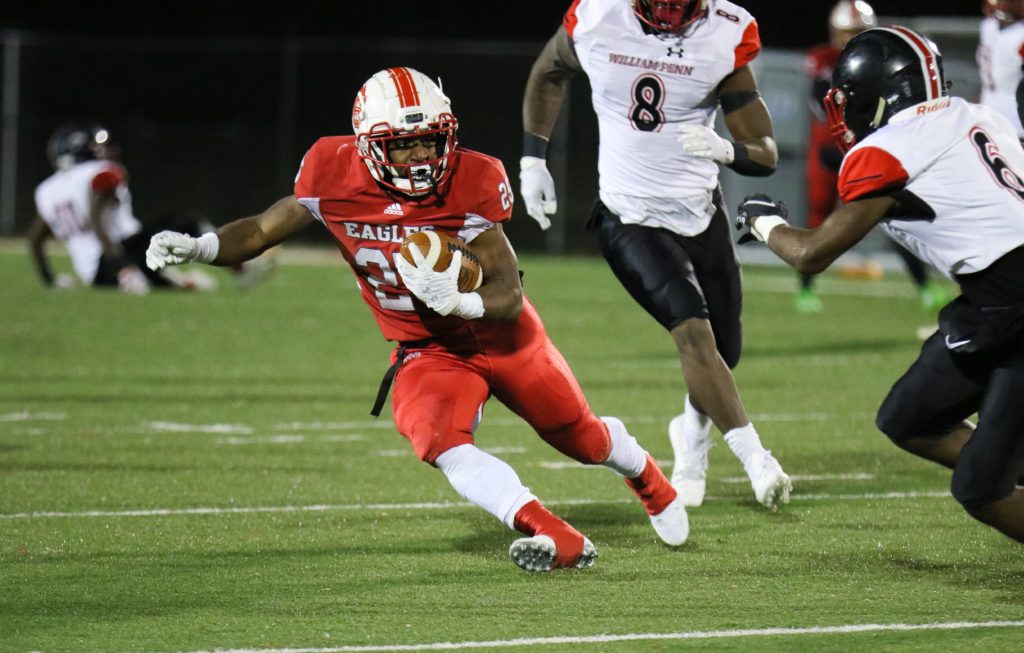 A blustery wind sent the temperatures into the low 20’s at Charles V. Williams Stadium, but it never “cooled off” the red-hot Smyrna offense.

Knight started the scoring on the Eagles 1st possession of the game on a drive that began at the Smyrna 18 yard line. The 12-play drive included a 4th and 6 conversion from the Smyrna 21 on a diving catch near the sideline by Nolan Fretz, and a diving catch by Andre Ashley of 29 yards to the Colonials 18 yard line. Knight scored on the very next play as he made a jump-cut move and raced in from 18 yards out plus ran in the conversion to give his team an 8-0 lead with 7:24 left in the opening quarter. That drive covered 82 yards and took nearly 4:30 off the clock. After the defense forced William Penn to a “three and out”, the Eagles would take just three plays to go 90 yards as quarterback Cameron Edge connected with Denim Smith for 38 yards on the 1st play, then Edge ran for 8 yards to the Colonials 44. The final play of the drive was a 44 yard touchdown pass to a wide-open Yamir Knight at the goal line as the Penn defender fell in coverage. Smyrna’s lead was 16-0 at the end of the 1st quarter.

The Colonials recorded two 1st downs in their third possession and moved down to the Eagles 29 yard line before a penalty backed them up and they turned the ball over on downs after a Brandon West sack at the 34. It took Smyrna just 6 plays to get into the endzone as Edge hit Devin Demoe in stride for a 45-yard TD to increase the lead to 24-0. William Penn was very effective on the following possession, feeding the ball 7 times to feature back Markell Holman who had his longest run of the night, gaining 20 yards to the Smyrna 25. He would score the only touchdown of the game for the Colonials on a 4-yard run cutting the lead to 24-6 with 5:41 to go in the half. William Penn would receive the kickoff to start the 3rd quarter, so a defensive stop could give them some hope & momentum going into the locker room. However, Smyrna would have an immediate answer in the name of Wyane Knight. The Eagles recovered an onside kick attempt at midfield. The first play from scrimmage was Knight for 50 yards and a touchdown, aided by a downfield block by Denim Smith. It would be the Eagles headed to halftime with the momentum and a 30-6 lead.

William Penn could not find success to start the 2nd half, giving Smyrna the ball at the Colonial 42 after a punt. For the 2nd time in the game, it took Smyrna just 1 play to score with Knight covering the 42 yards, again aided by a downfield block by Smith. Barely three minutes into the 3rd quarter, it was a 38-6 advantage for the Eagles. The Colonials were hounded constantly on offense by the Smyrna Linebacking corps of Nate Lesniczak, Cole Moyer, Dwayne Ratcliffe & Nasir Jenkins with blitz packages. The Eagles recorded 5 sacks including 3 by Brandon West.

Following a punt into the wind, Smyrna would take over at the William Penn 27 yard line and for the THIRD time in the game it was a 1-play scoring drive as Knight got a great “seal” block by Shane Drobinski, jumped a defender inside the 10 and carried another one to “the house” standing up for the final of 46-6. That touchdown started the “running” clock and both teams emptied the benches in the final quarter.

Since the Eagles scored twice on 1-play drives with Knight running the ball, Edge did not attempt a pass in the second half. He ended up completing 8 of 12 attempts for 187 yards and 2 touchdowns. Knight would finish with 162 yards on just 10 carries to give him 1,026 for the season. He has scored 31 touchdowns and has 240 points for the Eagles. Smyrna will take an 8-game winning streak into the semifinals next week.

William Penn finishes the season at 5-7. Junior running back Markell Holman rushed for over 90 yards in the loss, giving him nearly 1600 yards on the year to go along with 19 touchdowns.