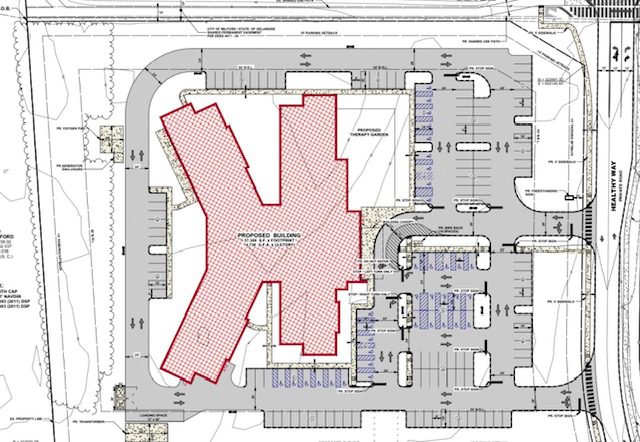 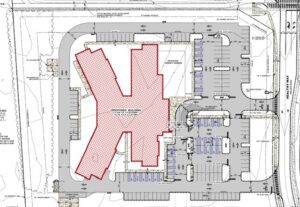 The red area indicates where a 74,000 square foot building will be constructed on the Bayhealth Sussex Campus to house PAM Health, an inpatient rehab facility

With City Council approval of a conditional use request, the Bayhealth Sussex Campus will expand with a 74,000 square foot facility that will house PAM Health, an inpatient rehab facility. PAM stands for Post-Acute Medical, a company that already has locations in Dover and Georgetown. They are currently using 40 beds in the Bayhealth building.

“This is a leased arrangement,” Mike Reimann of Becker Morgan Group said. “The site will be accessed from Healthy Way which intersects with Wilkins Road across from the Hearthstone Manor entrance. There are some trees midway through the property and we will be clearing some of those trees. However, we are still maintaining a pretty significant buffer and leaving some existing trees.”

Reimann explained that DelDOT had already approved the addition of right and left turn lanes at the intersection of Healthy Way and Wilkins Road, a project that Bayhealth will be sending out to bid soon. Anthony Lampanosa, Chief Development Officer for Catalyst Healthcare Real Estate, explained that his company formed a joint venture to operate the facility with Bayhealth who will continue to own the land where the new building will be constructed. Catalyst will develop, finance and own the building with PAM being the long term tenant in the structure. The lease will be for 20 years while the land lease would be for 50 or 60 years.

“The purpose of this facility is to operate as a specialized inpatient rehab care facility,” Lampanosa said. “We meet the mission of the hospital to provide comprehensive health care services to the community and beyond. That’s been the mission of Bayhealth Sussex ever since it’s opened, and it has been outperforming initial projections for needed space and services within the four walls of the hospital. Right now, there are about 40 inpatient rehab beds in the current hospital building. The hospital could really use that space to provide core healthcare services on an acute basis as it continues to outperform its expectations. This building will have 40 beds built out on day one, and there will be some capacity built into the structure for an additional future 8 to 10 beds if they are needed.”

Lampanosa explained that the patients who will use this facility are those who are complex medical cases, those who have had hip replacement surgery, a stroke or a cardiac event. Due to insurance or other reasons, they can no longer stay in the hospital, but they still need intensive care to rehab their health issues. The patient is checked into PAM Health where they stay for an average of 7 to 10 days.

“Rehab in this building does not mean drug and alcohol rehab,” Lampanosa said. “It doesn’t mean anything to do with behavioral health. While those services are absolutely needed and provided for by others, this is more a physical rehab and occupational therapy as well as physical therapy focused on rehabilitation services.”

Councilman Dan Marabello asked if the facility would add jobs in the area. Ted Werner, CEO of PAM Health Dover explained that a facility like the one proposed would require a few hundred staff members. Some of the staff would transfer from the current rehab facility within Bayhealth, but there would likely be more employees hired. This may include environmental services, housekeeping, dietary and other support services. Lampanosa stated that during construction, there could be close to 1,000 temporary construction jobs generated. Councilman Jason James asked if this location would have a similar layout to Dover’s location.

“The Dover facility is slightly smaller with only 34 private rooms,” Werner said. “I believe the total square footage is 44,000 square feet, so this will be larger. However, the layout will be similar in regard to the two stories, but slightly different as it is larger.”

Mike Ashton, Administrator for Bayhealth, spoke in support of the request for the conditional use. He stated that the hospital was often at capacity so the ability to turn the 40 rehab beds into patient beds would assist with that. George DelFarno, Chief Operating Officer at Bayhealth Inpatient Rehab, explained that his office had spoken to Polaris at the Milford Wellness Village and that this would be a different continuum of care than what they offer in their facility. DelFarno stated that they would continue to remain in contact with Milford Wellness Village as some patients could transfer to their programs after discharge.

“I wish to make a general comment,” Acting Police Chief Ed Huey said. “I am not sure if I am out of line or not, but I just wanted to comment to Mr. Werner that when our officer Junior Corporal Webb was injured in the line of duty, it was PAM hospital that took care of him. He walked out of the hospital a week after arriving there with some serious damage to his leg. So, we appreciate what your hospital did for our officer.”

The conditional use was approved unanimously. Councilman Dan Marabello stated that he voted yes “wholeheartedly,” while Councilman Mike Boyle felt the project was “exciting.”

“This is the type of use and care we focused on for this area,” Councilman Fulton said. “You’ll see our pathway for the people to free up the beds inside the hospital, go on to inpatient rehab at the PAM facility and move on to an outpatient facility for rehab. It just shows that we’re taking care of them from injury all the way through until they are a lot better than they were in the very beginning. It’s amazing what the rehabs can do for people. The only thing that I can think of to make it better would be a level two facility.”

Councilman Todd Culotta acknowledged that healthcare and healthcare growth was a core economic driver in the area while Councilwoman Nirmala Samaroo stated that it would be “great for the city” as did Councilman Brian Baer.” Councilman Jason James felt this was great for the community and thanked PAM for partnering with Bayhealth. Councilwoman Katrina Wilson stated that she had seen some of the good work PAM did and that she knows individuals who have benefitted from their services.

“I just want to make one comment,” Mayor Archie Campbell said. “This makes Milford a medical mecca. I’m going to be very honest. I am very happy.”

Lampanosa hopes to break ground for the new facility in October.