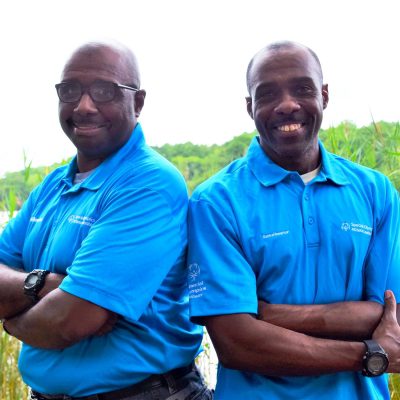 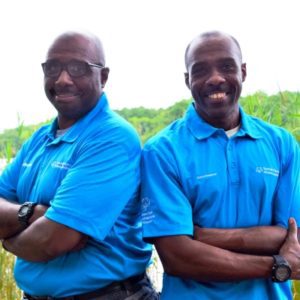 More than 30 years ago, William and Antonio Bowe, both of Milford, decided to give the sport of swimming a try as part of the Special Olympics. That first step into the pool led them to decades of friendship, new experiences and, at the Annual Night of Heroes, induction into the Special Olympics Hall of Fame.

“Amazing!” William said when asked how it felt to be recognized. “I am excited because Special Olympics is not just friends, it’s family. It’s not just a sports experience, it’s a way of life for me.”

His brother echoed his statements.

“I was ecstatic,” Antonio said. “Special Olympics has given me the opportunity to compete in sports and meet other people.”

Jon Buzby, Senior Director of Unified Champion Schools for Special Olympics Delaware stated that the Bowe brothers have a wonderful story. Their father, Theodis, explained that when the boys were younger, they were very protected and likely over-protected. After the passing of their mother, Theodis realized he had a responsibility to make William and Antonio independent. He knew that the nature of life would separate the three of them and he told them that even though they were different, they were human beings. He explained to the young men, then in their 20s, that they should respect everyone even if they did not get respect in return. The rest, according to their father, is history.

“So, their father basically put them out on their own in a good way so they would be able to learn how to function as two adults with jobs,” Buzby said. “They live together in their own apartment where they cook and clean. I give a lot of credit to their parents because not a lot of parents would do that. In their case, they did, and it has been very successful. The boys go over to their parents’ house for Sunday dinner like many adults do. So, it has just been neat for me to watch them grow and watch them as people and athletes. I have been doing this for 32 years and they are one of my favorite stories about the difference Special Olympics can make in their lives.”

Although the Bowe brothers began Special Olympics as swimmers, they soon discovered other sports where they excelled. William chose to participate in walking events as part of the Track and Field program, participating in the 100 to 400 meters, the one-mile walk and the standing jump. Antonio’s favorite sport is running, especially distance. He eventually began to participate in community-organized 5K races as well as several half-marathons and a marathon.

“He has an incredible work ethic and is disciplined in all aspects of his life,” Len Leshem, one of Antonio’s first Special Olympics coach. “He’s the fittest guy I know, and I’ve known some really fit people over the years. His commitment to physical fitness inspires me. And he’s as genuine, honest and friendly as they come.” Leshem now considers Antonio a lifelong friend.

Antonio began powerlifting as a way to build strength for his track and field endeavors. His discipline led to him winning three gold medals in powerlifting at the 1995 World Games in Connecticut. He also won a gold and two silvers in track and field at the 2018 USA Games in Seattle. However, the biggest adventure the brothers took was in 2010 after William took up bowling and convinced Antonio to be his partner. The pair were selected to compete in the China National Games, leading to not only the brother’s first trip out of the country, but the first trip on an airplane.

“The experience of flying for the first time and meeting people from another country was the best part,” both brothers said. The experience paid off as they won a bronze medal in the double’s competition.

The excitement of their adventure led William and Antonio to join the Communicate with Confidence course where they honed their speaking skills and now tell their stories to audiences around the country in order to explain the impact Special Olympics has had on their and other athlete’s lives. William presented several times at the Annual Night of Heroes and learned that, when he reads aloud, his stutter disappears. Both brothers hold down full time jobs and are both very artistically talented.

“William has a mind where he can take a drive, like from New York to Milford, he would be able to, when he arrived at his destination, draw every sign he passed along the way,” Buzby said. “He has autism, and he has a photographic memory from that. He has drawn, I’m sure, it is thousands of maps from that. Antonio is an artist, too, his focus is more on comic superheroes and bridges. He loves bridges. They are very big in their church, attending church or Bible study every day. I just cannot say enough great things about them.”

Pam Cannon was also recognized as the Outstanding Volunteer of the Year. Buzby explained that Cannon, who lives in Seaford, takes athletes who have no transportation to practices, games and meets. Currently, she is driving a Seaford Special Olympics participant to Middletown twice each week for basketball practice for a team that plans to compete in Florida at the USA Games. Mary Ann Evans of Smyrna was recognized with the Lifetime Achievement Award.

“I have been doing this for 32 years and she has been doing it longer than I have,” Buzby said. “Her daughter is in Special Olympics, and she chips in and does everything that is asked of her.” Evans has participated in a Special Olympics fundraiser, Over the Edge, every year it has been held. At that event, participants rappel down a 17-story building.

Buzby stated that athletes can join Special Olympics at the age of two but there is no age limit for how long they can compete.

“We have what we call a Young Athletes Program for younger children,” Buzby said. “Most of our athletes age out at 70. A lot of them still bowl or they’ll play bocce. But they are the runs who have been running track since they were 18. Eventually your legs give out whether you have a disability or not.”

Theodis is very proud of his sons and was excited to see them honored as the 31st and 32nd members of the Special Olympics Hall of Fame.

“I am very excited for them to receive this honor,” Theodis said. “They’ve been in it for a long time and I never thought it would come to this point. Special Olympics is a great thing for them. I always told them there would be a place in life for them.”