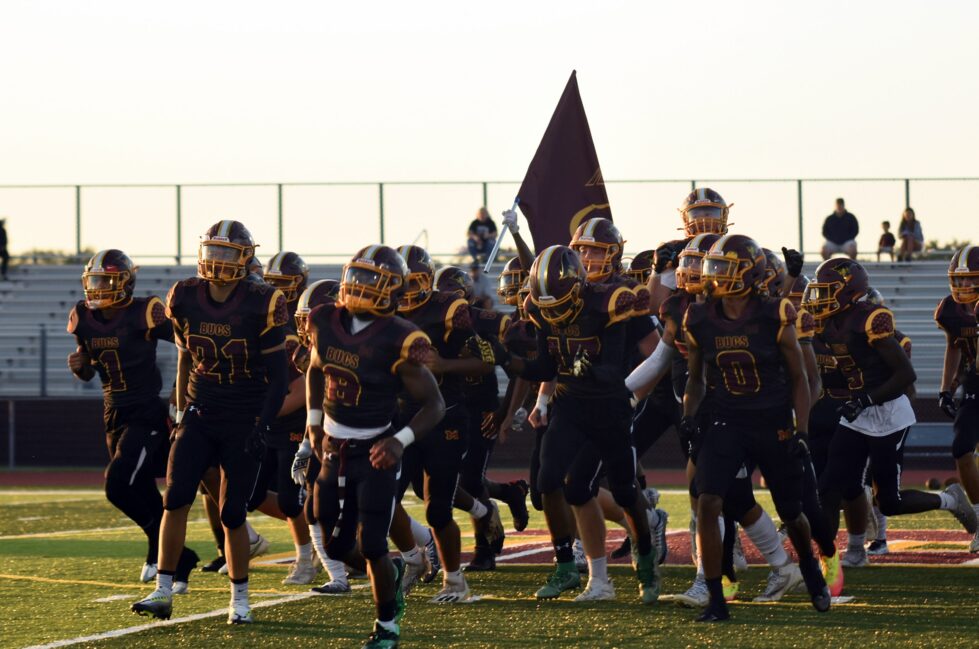 Last Friday night at Milford’s Briggs Stadium was a mixture of both old and new. With the induction of the 2022 12th Man Gridiron Club, Hall of Fame class, five past members of the Buccaneers football program were honored. Two of those honored, were part of the 2008 championship team, Head Coach Mike Tkach and linebacker/lineman Ryan Deeney. That was the old.

The new was Milford’s new turf field – ironically installed in that same 2008 season. In addition to the field, Buccaneers senior starting quarterback, Ryan Mejia got his first home start in a thrilling contest between two hard-hitting teams. “It was great to finally get a chance to play quarterback and show what I could do in front of my home fans. Everyone was excited and we were happy to get the win,” Mejia said.

It was a classic early season game, with hard hitting and many miscues. It was also a game of two very distinctive halves. In the first half, it looked as if the Milford defense would be solid and difficult to penetrate, In the second half, there were moments it was lost and in trouble.

In the first quarter, Milford used a solid running game, with some passes thrown in to repeatedly down the field. There was only one issue, every time Milford seemed to have momentum, the Buccaneers would find a way to shoot themselves in the foot. Whether it was poor execution or silly penalties, Milford left at least 14 points on the field Friday. “We practice, guys know what is expected of them and yet they still make mental mistakes. There were no excuses for some of the things that happened out there tonight (Friday), you can believe me that we are going to fix them,” Coach Shaun Strickland stated.

After a scoreless first quarter, Milford would finally breakthrough in the score column, as Mejia took it in from one yard out after a 58-yard drive. While the touchdown was important so was another play Mejia made in the first quarter, with Milford forced to operate from its five-yard line. On a key second down play, Mejia would connect on a shallow cross to senior A.J. Kravitz, allowing Milford to get the ball 40 yards down the field and flip field position. While the Milford drive would stall, flipping field position would be huge.

Milford would get the ball back late in the second quarter, with just under a minute left, Milford would start the final drive of the first half at midfield. The Buccaneers moved the ball well under Mejia’s stewardship, reaching the Knights’ 22-yard line. Mejia tried a few attempts to Kravitz, who could not fight off the double and triple coverage he was getting. With one final shot as the half was coming to an end, the Bucs would head in another direction. Mejia connected with sophomore tight end John Case for a touchdown as the clock expire, giving Milford a 14-0 advantage. “That was a call for Case all the way, the way they were all over Kravitz we knew it would be there for us,” Kravitz said.

To begin the second half, it looked as if Milford was about to break the game open, as junior Elijah Lake returned the opening half kickoff 85 yards to the house. Milford once again would miss the PAT, but the vibes on the sideline for Milford were that of confidence. Regarding the run, Lake made just one subtle move, and then hit the lane before going all the way. “That hole was a little tight, but I knew if I could get through it, there was a lot of green in front of me. I just gave the defender a little juke, and I was off to the races,” Lake said.

While Milford may have thought it would easily salt the game away, North County had other ideas. On the ensuing possession, the Knights came out throwing with sophomore quarterback Darius Burley, rapidly moving down the field. In less than a minute, Burley connected with senior Ibrahim Barr to close the gap to 20-7.

The Buccaneers did little on offense on their next possession, going three and out handing the ball to the now confident Knights. Continuing the air attack, North County would make its way down the field, a chunk at a time. Closing the gap on Milford to 20-14 as the tension in the stands started to mount. The one place that remained calm however, was the Milford sideline. With the past two defensive series having seen wide-open receivers, the Bucs coaching staff, collected the defensive players and coached them up. From that point on, Milford defenders were where they were supposed to be. “Our coaches made great adjustments defensively to their passing game, our players knew their assignments and things went pretty well for us from that point,” Coach Strickland stated.

Milford was still having difficulty moving the ball but was able to put together a huge fourth quarter drive, capped off by a six-yard touchdown run by Lake. The two-point conversion gave Milford the breathing room it so desperately needed, advancing the score to 28-14 with 8:10 remaining for the game’s final score. While it may have been Lake who scored the touchdown, fellow sophomore DenNare Horsey also played a huge role in the running game. “Between DenNare and myself, we are a very difficult running game to defend. Tonight, was my night to find the end zone. Believe me, DenNare is going to get his share this season as well,” Lake said.

Next on the schedule is a visit to Lake Forest for the annual Battle of The Bell game. If Milford hopes to stay close to a solid Lake team, it must really clean up the mistakes it made against the Knights. “If we play like we did tonight, Lake will eat us for lunch. They are such a strong program, mistakes and second chances are the last things we need to give them,” Strickland concluded.