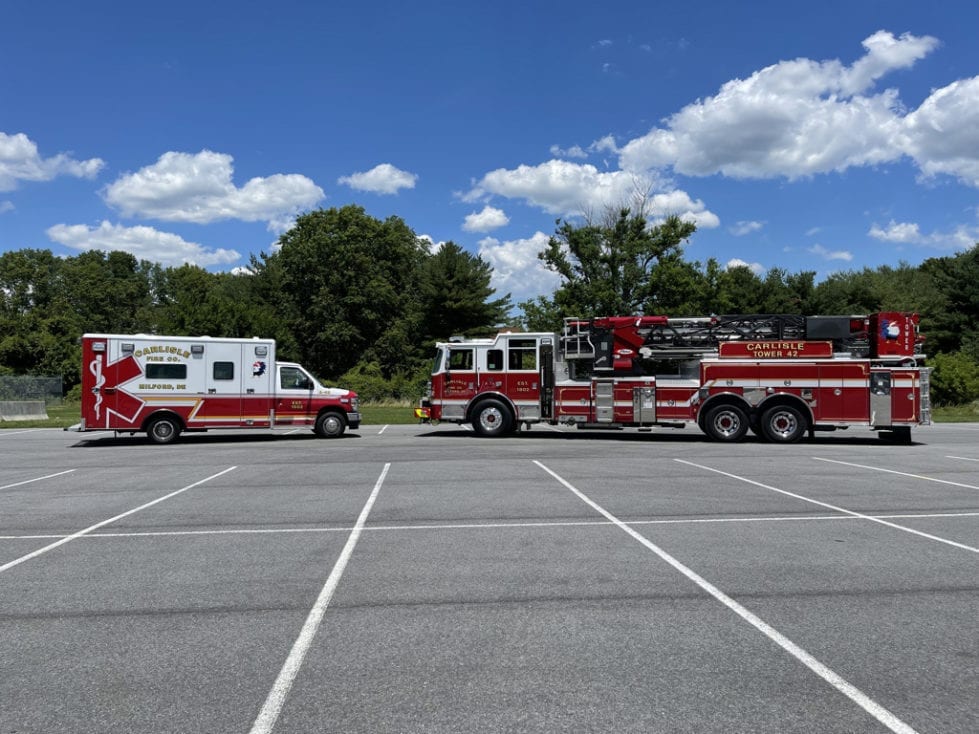 Carlisle Fire Company recently purchased a new ambulance and a new ladder truck, replacing equipment that had aged out of service. Both pieces of equipment have new technology that will benefit not only the firefighters and EMTs, but also the citizens of Milford.

“Our old ladder was purchased in 1992,” Ryan Knowles, Fire Chief, said. “It was a rear-mount aerial truck and it served us well for 29 years. It started to get a few problems, mostly minor, so we decided it was time to replace it before the issues became major. The life expectancy of any fire truck is about 20 years.”

The old ladder truck was a Simon Duplex LTI 110’ truck known as Ladder 42. It had a six-man cab and a specialized aerial breathing system, Stokes basket and Whelen emergency light system. When someone was using the ladder and bucket, there needed to be someone on the ground directing them, making the old truck more of a two-man operation. The new truck allows for one firefighter to direct the ladder from the bucket.

“With building construction in the area and infrastructure like the new hospital, we felt we needed to upgrade the ladder truck,” Knowles said. “We feel that this one will serve us a lot better.”

With the new hospital now located south of Milford, Carlisle Fire Company ambulances are running about six additional miles for each ambulance run. In January, the company reported to City Council that they were averaging between 4,000 and 7,000 ambulance runs each year, a number that is expected to rise as the population ages. In addition, the new assisted living facility located at Milford Wellness Village where they former Milford Memorial Hospital stood has increased ambulance runs as well.

The new ladder truck, which will be known as Tower 42, cost the company $1.4 million. The company has listed the former ladder truck for sale.