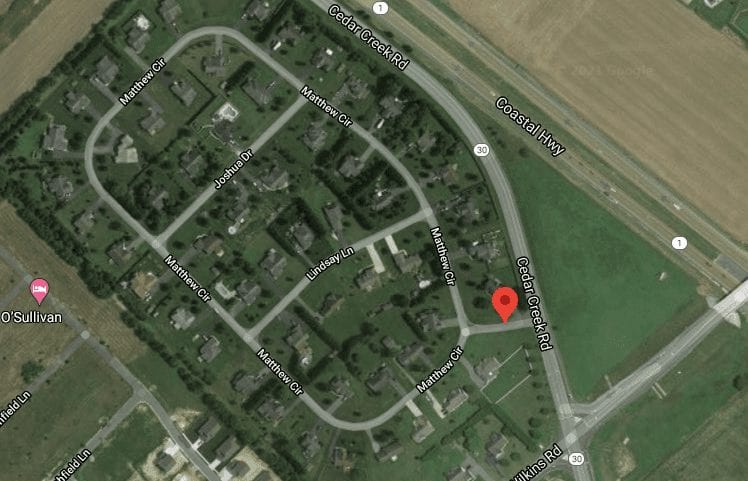 A solar light has been installed at the entrance to Mattlind’s Estates using CTF funds to improve safety in the area.

The City of Milford Public Works Department recently partnered with Representative Bryan Shupe and his Community Transportation Funds (CTF) to make the Matlinds Estates neighborhood entrance safer for its residents by utilizing the Funds to purchase a solar light.

In December 2019, the City was contacted by one of the neighborhood’s residents about the lack of lighting at their entrance along Cedar Creek Rd.  Further investigation led Milford Public Works to the unfortunate conclusion no electric lines existed from which to capture the power for lighting along the road leading to the entrance.  Rep. Shupe, however, contacted the City a few weeks later indicating CTF funding from the FY20 Bond Bill could cover the costs.

Since security was the main concern but no electricity source existed at or near the location, the Public Works Dept. utilized the CTF funding to purchase solar lighting equipment from Florida Sol Systems, Inc.  On March 15, the solar unit arrived and was installed on a pole erected by the City’s Electric Division at the entrance to Matlinds Estates, and has been in operation ever since.

“The project is quite a ‘feel good’ effort,” said Michael Svaby, Public Works Director.  “The State’s CTF mechanism worked in the way it was intended and the outcome is a more secure entrance established by the City of Milford Public Works, using an environmentally-friendly lighting fixture.”

A 2018 presentation about the CTF explains it was established in the mid-1980s by Delaware’s Bond Bill Committee to speed up the process of making relatively small local improvements, as well as put decision-making about priorities into the hands of each community through their State Representatives.  The Representatives are given a fixed amount of funds annually and they must be used on projects that have a transportation component, are on public property and benefit more than one individual.  The Matlinds Estate entrance project fit the bill.