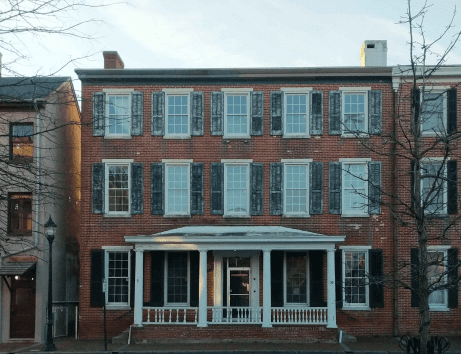 “The applicant wants to keep the two commercial spaces in the front of the first floor, but convert the rear of the first floor into two additional apartments,” Rob Pierce, City Planner, said. “There would be no changes to the exterior of the building except minor brick repair as well as the guardrail on the front porch. Vinyl windows would be replaced with historically accurate windows.”

When asked where tenants for the apartments would park, Bond explained that there was a large municipal lot across the street that was under-utilized currently and there was also street parking available.

“There is no special parking allotted as the building takes up almost all of the lot,” Bond said. “There was a fire in the building about three years ago and it was vacated at that time. Soon after, I began planning this renovation project but was tied up with the townhome project and I put this aside. There are no tenants in this building at this time.”

The home is known as the Wells Carlisle home, named for the prominent Milfordians who either lived there or operated businesses at the location. Built in 1855, the building at 10 Northwest Front Street was built by Curtis Watson whose brother, Bethuel, built the one next door at 12 Northwest Front Street.

Bethuel, who was born October 23, 1816, married Ruth Tharp, the daughter of Governor William Tharp, on November 28, 1828. The couple lived in the home at 12 Northwest Front Street where they raised four children. One of their children, William Tharp Watson, served as the 41st Governor of Delaware. Bethuel and Curtis’ sister, Elizabeth, married a prominent shipbuilder, Manlove Carlisle.

Curtis was the oldest child of Beniah and Elizabeth Watson. He obtained his education at Milford Academy and lived on the family farm until he was 19. He began working as a store clerk and, at the age of 21, entered his father’s mercantile business under the name B. Watson and Son. When his father retired, Curtis took over the business, bringing his brother on as a partner and changing the name to C.S. Watson & Company. The two brothers built their stately new homes on Front Street in 1855 and, in 1856, both retired from the mercantile business.

In 1857, a typhoid epidemic struck the town of Milford. Bethuel died of the illness that year at the age of 40 along with his sister, Elizabeth Watson Carlisle. Ruth Tharp Watson inherited the home located at 12 Northwest Front Street. In the wake of these tragic deaths, Bethuel’s widow, Ruth, married Elizabeth’s husband and the couple resided in the home on Front Street. Manlove died around 1888 and Ruth lived in the home until her death in 1917.

In 1891, a fire that nearly burned the entire town of Milford began in a shed behind Ruth Carlisle’s home. According to Milford historian, Dave Kenton, Fred Voelker, valet to General Alfred Torbert, fell into alcoholism after the General died in 1880. Voelker often slept in the stable and it is believed that either a cigar or lantern ignited straw in the shed, causing a fire that burned most of Walnut Street as well as several roofs on Front Street. This fire led to the development of the first water tower, which was built in 1892, and the establishment of what is now the Carlisle Fire Company.

After Ruth’s death, the Tall Cedars of Lebanon purchased her home, holding meetings on the second floor. They eventually purchased the former Caulk Building on the corner of Maple and Causey Avenue.

After the death of his brother, Curtis engaged in buying and selling grain, guano and phosphates for another 25 years. He retired for the second time in 1882 in order to focus on his many land interests in Kent and Sussex County. In 1876, Curtis helped organize the First National Bank of Milford, serving as a member of the board of directors for ten years. He served as president of the bank on several occasions.

For 15 years, Curtis was a director in the Junction and Breakwater Railroad. He served as a state representative in 159 and 1861. He represented Kent County in the State Senate as well. He was a member, trustee and steward of the Methodist Episcopal Church in Milford as well as a member of the Temple Lodge No. 9.

Curtis died in 1897 and his home on Front Street was inherited by his daughter who married Dr. James Stanton. Eventually, his son, Dr. Robert Watson, operated a medical practice in the stately home. For many years, Milfordians referred to the home located at 10 Northwest Front Street as the “Watson-Stanton Home.” For a short period, the first attempt at a Milford hospital was located in the home before it was moved to the Windsor Hotel. Around 1960, Harold Halpern, an optometrist, purchased the building and was the first optometrist to sell contact lenses in Milford from that building.

The home at 10 Northwest Front Street was purchased by William Wells who operated an insurance and real estate company from the first level of the home. The upper floors were converted to apartments. In 2018, Dan Bond purchased the Wells Building, planning to undertake a full restoration of the building.

City council approved the request to convert the building with a vote of six to zero. Councilman Todd Culotta abstained due to a conflict of interest.

“This use doesn’t affect the area and is actually an enhancement,” Councilman Dan Marabello said. Councilman Mike Boyle agreed, stating that the building had been vacant and in need of repair but held significant historical value to the city.

Councilman Jason James stated that the project would enhance the downtown area while Councilwoman Katrina Wilson believed this would be a wonderful opportunity for the building.

“I had friends who lived in that building years ago and I know it has great bones,” Councilwoman Wilson said. “I can’t wait to see what you guys do with it. We need more affordable housing in Milford.” Councilman Brian Baer stated that he knew “Dan does good work” and was excited to see the building renovated.