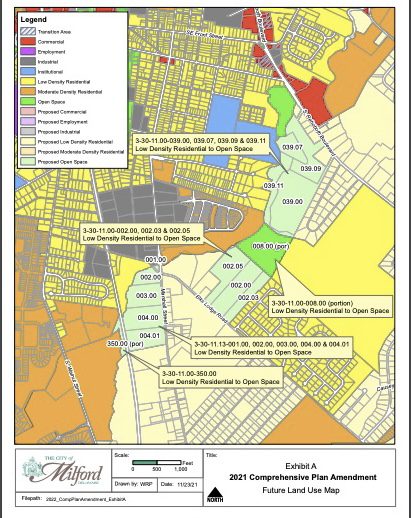 “Every year we try to compile any revisions to our Comprehensive Plan that we want to take forward to the State of Delaware in one package,” Pierce explained. “That way, we do it one time a year. These will come back to City Council for additional public hearings and public outreach. So basically, items two and three that are in the packet, in the memo, are for informational purposes only. Again, we are not going to debate it or take any action on those this evening.”

One of the amendments would create a green space area south of Herring Branch and Deep Branch between South Rehoboth Boulevard to Walnut Street. City staff proposes changing the future land use designation of several properties from what is currently a low density or future low density land use to open space in order to clearly define intentions on not wanting those properties developed but retained for open space. One of the properties was acquired by the city several months ago while other portions of the property include the former Rookery North. There are some properties that have improvements, but most are open agricultural land.

“About the green space for the Rookery,” Mayor Archie Campbell asked. “Will that change if somebody buys it and a developer decides to put homes on it?”

Pierce explained that by designating the land as open space, the city could work with whoever purchases the property to make that an open space area, whether the city purchases the property or someone else purchased the land. Any developer could incorporate open space into their plans, but the city’s goal is to keep that land as much open space as possible. Pierce stated that the Comprehensive Plan simply set out what the city wanted the desired land to be and that it would take time to implement the change.

“So basically, putting this in writing like this shows that we want it to be open space,” Councilman Andy Fulton said. “So that way, we’re in a better condition to deal with any developers that come along and want to do something else. Especially since it’s already been designated as open space, they’d have to go back in and ask for rezoning. Is that correct?”

Pierce stated that was correct, but that this also helped the city.

“If we’re going after any funding at the state level or federal level to preserve land, those acquisitions and purchases need to be combined with a comprehensive plan,” Pierce said. “Again, those boundaries can change a little bit as we try to implement this.”

The next staff-requested amendment was to update the bicycle traffic language in the plan and to include some transportation projects so that they could be forward to Dover Kent MPO and to DelDOT for consideration. Several intersections were included in the plan, such as one at North Walnut and Rehoboth Boulevard, several intersections on Route 113 and looking at improving pedestrian, traffic and bicyclist flow near Marshall’s Pond.

“One of the more pressing intersections is the one at 10th Street where Walnut, Rehoboth Boulevard, 10th Street and Salevan and Washington all come and converge together,” Pierce said. “So, we’d like to kind of get that one the radar at the state level for some potential improvements.” Pierce also presented changing Southwest Front Street from a partial one-way street to totally two-way traffic as well as changing the intersection at Walnut and Southwest Front Street.

The final staff-requested amendment was to adjust the intersection at Jefferson Avenue and Southwest Front Street. Pierce explained that the electric department had recently removed a utility pole at the intersection and there are concerns about the traffic configuration with Jefferson being offset beside the railroad tracks as well as pedestrians crossing the tracks. There were also changes designed to incorporate the 2021 Bicycle Master Plan into the Comprehensive Plan.

Map indicating plans for properties east of Route 1 should the Comprehensive Plan be changed to allow for commercial rather than low residential on the land.

The two properties whose usage change was initiated by the property owner were for lands located east of Route 1 that consists of about 120 acres. The parcels are currently in the Comprehensive Plan as low-density residential and the property owner, Elmer Fannin of Country Life Homes, is requesting to change them to commercial.

“This is a similar request to what was heard by City Council two years ago,” Pierce said. “They have included with the request a concept that will be forwarded to the state. Again, these are just for informational purposes. This will come back to City Council at a future date, and we will probably have to hold public meetings, public workshops on this as well because it’s a revision of our Southeast Master Plan. But I did want to make you aware that these are being sent as part of our annual request of this.”

“The Mr. Wiggles property and the former Thawley farm that stretches more or less from the overpass and Wilkins Road or Cedar Neck Road all the way up to the former four-way crossover that was taken out by DelDOT about 10 years ago, so the long stretch.”

Mayor Campbell reminded Pierce that the last time they had a request for an amendment for this property, the city was required to hold public meetings and circulate information about those meetings to those living near the property.

“Like I said, this is just an informational presentation of what’s being sent off to the state,” Pierce said. “And once we hear back from the state, we’ll know better what needs to be done to formally review these at a city level.”

According to Pierce, another property owner request could be added before the final Comprehensive Plan was submitted to council for approval. Lands at the northeast corner of Route 14 and Rehoboth Boulevard, the former site of the pallet recycling company, may be looking at going from industrial to commercial. Pierce stated that they had not turned in documentation prior to the Monday, January 10 meeting, but he did not want them to have to wait another year for submission since they were very close to completing the request.