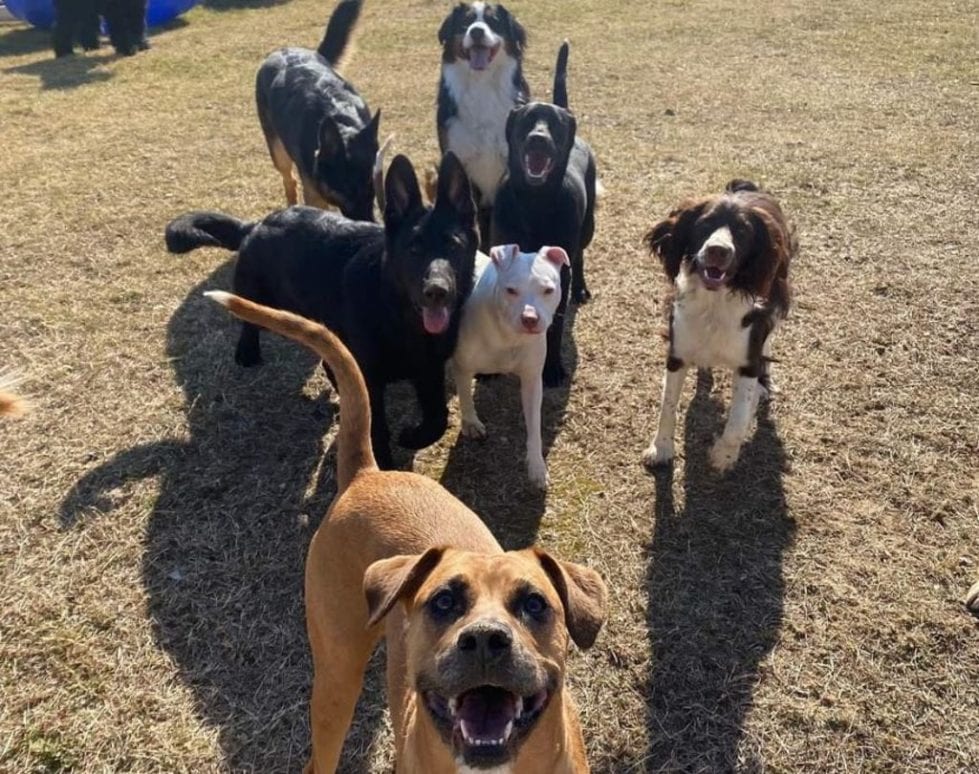 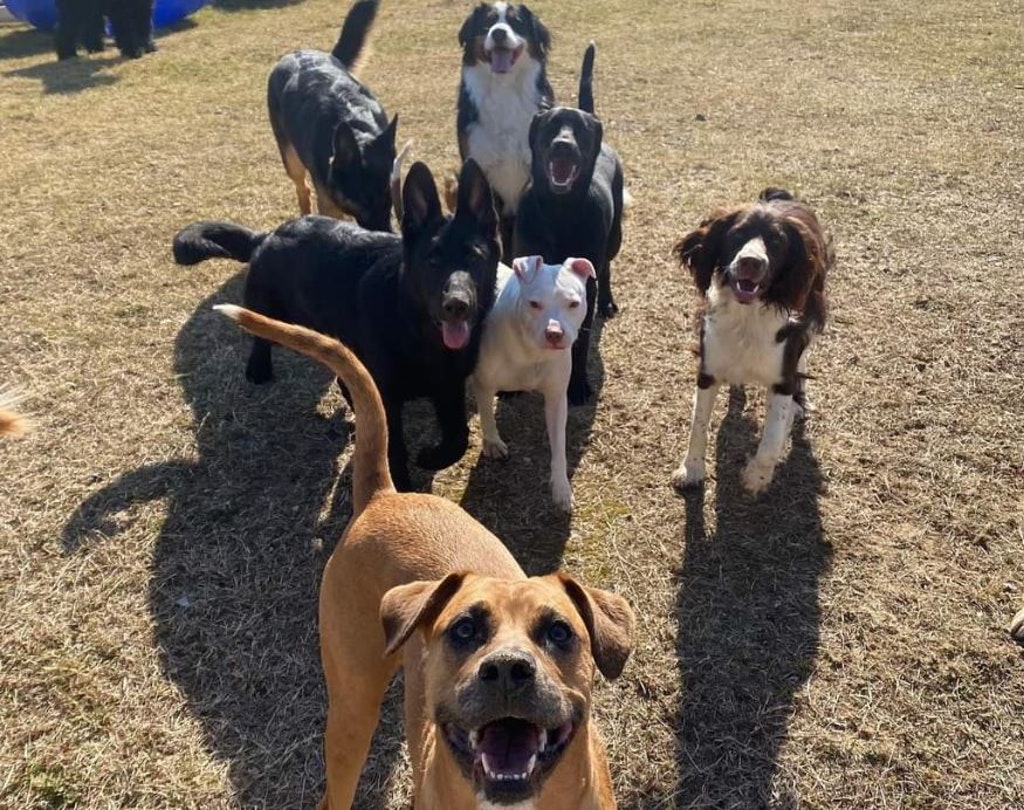 Sherry Shupe started volunteering at a pet rescue Paws of Tomorrow a decade ago, when she was looking for something to help balance her stressful job as a pharmaceutical rep.

She quickly started participating in events and fostering dogs. In the meantime, she increasingly dreaded going to work and began to realize she was looking forward to and doing more for the rescue than her career.

“I decided I needed to find a way to turn my passion into my career,” Shupe said.

The result: Fur Baby, a Milford store she wanted to not only sell doggie-related products, but also help foster the  relationship between owner and pet.

It celebrates its 10 anniversary May 1, in a new building with a party and ribbon-cutting ceremony at 11 a.m. at its new building at 301 NE Front St. in Milford.

The business not only is located for the first time in a space that Shupe and her husband own, but also has expanded during the years to become a full-service Fur Baby Pet Resort. Its team of 16 offers doggie day care, an overnight pet hotel, a  grooming spa and raw food that mimics the native diet of dogs.

Despite the tribulations of starting a new business and having to move four times to accommodate growth,  the last in a pandemic, it’s a satisfying milestone for Shupe.

“It definitely wasn’t a decision made upon financials,” she said. “I had this wonderful career and wonderful benefits that from the outside appeared to be a wonderful life. And I was depressed, I didn’t want to do it anymore. It was a leap of faith, hoping my passion and my dedication to this would provide.”

As soon as she opened, she started getting customers and callers asking if Fur Baby could provide that grooming and day care. So she did, starting with groomers first and then day care.

Peggy Reilly has been taking her Brittany border collie there for nine years, beginning when Maddie was 10 weeks old.

“She had high energy, and I needed to get rid of some of that energy during the course of the day,” said Reilly, who was working from home even then. “I also needed to make sure that she wasn’t getting into trouble and Sherry’s Fur Baby really solved that problem for me by allowing her to go and be with other dogs.”

Because border collies are natural herders, Maddie enjoyed being able to help with the other dogs, Reilly said.

“When she first started out, they used to call her the assistant manager,” Reilly said, because if Maddie couldn’t get along with a dog, it likely wasn’t going to do well in day care.

Maddie used to go to Fur Baby three times a week, but as an older dog, she goes twice a week and sometimes three times, Reilly said.

“It’s a phenomenal business that Sherry has put together and and made such a success,” Reilly said.

Shupe earned a degree in international business from Salisbury University, but the only retail experience she had before opening Fur Baby came in high school jobs. She funded the business with her own savings and 401K money, working both at the store and as a pharmaceutical rep for eight months before quitting to focus on Fur Baby.

The business also gave her a husband. Milford Live owner Bryan Shupe (now CEO of Delaware Live) called and set up an interview with her her about the new store on Jan. 12, 2011, her birthday. She forgot and stood him up. He called back and she agreed to meet him for a 30-minute interview.

About an hour into it, she realized the questions were very personal and had nothing to do with the business: Where she was from, what she liked to do, did she want children.

“We were there about two hours and covered everything,” she said.

A week later, he was helping her put up shelving in the store, which he calls their first date. By Feb. 2, which she said is their first date, they were a couple. Now married for six years, they have two two children, Evelyn, 4, and Theo, 1. Shupe went on to become Milford’s mayor in 2014 and served two terms before become a state representative for Milford in 2018.

“She didn’t know what she was getting into,” he said.

Fur Baby has moved four times, the first three into rental spaces, each a little bigger than the last. The first move came a year after opening, because the building was sold. The next two were because they needed bigger space, with the final rental space being 6,200 square feet.

The space allowed the business to really expand day care, start offering overnight services, expand grooming and get into nutrition, focusing on natural dog and cat foods. The Shupes expected Fur Baby to stay there for a long time, but after six years, they were maxing out in every way.

They also realized that every time they moved, they heavily invested in the space, and then had to leave a lot of that investment behind. So the Shupes decided to buy their own building.

As they searched, they kept passing an older 10,000-square-foot metal building that had been used as a warehouse and more by Growmark FS Inc., a fertilizer company in Milford. It sits at the east end of Milford’s Downtown Development District.

It took the Shupes a while to convince Growmark they were serious buyers, and the deal went through in December 2019. Just in time for the COVID-19 pandemic to shut the world down.

They expected a four-month rebuild to strip the building and reinstall wiring, plumbing, flooring, insulation, roofing and more. Instead of weeks turn-around time for parts of the project, it was months. Most of 2020, only one crew at a time could work in the building.

Now painted a bright blue, the new Fur Baby opened in January, complete with three-quarters of an acre outside for doggie romping room. All that room allows four indoor and four outdoor play areas.

Fur Baby now has 75 dogs enrolled in its day care, although most don’t come every day. It has the capacity to handle 100.

The dogs are divided into four play groups.

The New Castle group is little dogs that are 20 pounds and less, including puppies. The Kent County group is medium-sized dogs, including younger dogs and high-energy breeds.

“They are our big play group. They play all day non stop,” Sherry said. “They don’t want to take a lot of breaks.”

Older dogs are in the Sussex County group.

One of the Shupes’ two dogs, Hannah, is in that group. At 8, Hannah is slowing down and not so tolerant with puppies.

The final group is Bayside, for dogs that like limited play. Sometimes it’s for medical or behavioral reasons. Sometimes the dog is just shy. Sometimes they only like small groups.

“I always say we’re not in the business of torturing people or their pets,” she said. “Like with humans, big parties or festivals aren’t for everybody.”

The daily rate for day care is $32, but there’s various discounted packages. Most dogs come several times a week, but some just drop in and others are there six or seven days a week, Sherry said.

Fur Baby’s Boardwalk Hotel offers oversized suites for 40 dogs and seven for cats. Each pet gets its own suite at night, but joins the play groups during the day. The boarding fees start at $50 a night, but also can be bought in discounted packages.

“Every guest goes to play for 12 hours a day,” Shupe said. “So at the end of the day, they’re tired. They go to their rooms and they’re out for the rest of the night.”

Cameras stay focused on the hotel guests so the Shupes can watch from their nearby home. If there’s a problem, they can quickly get to Fur Baby, but they haven’t had to yet. 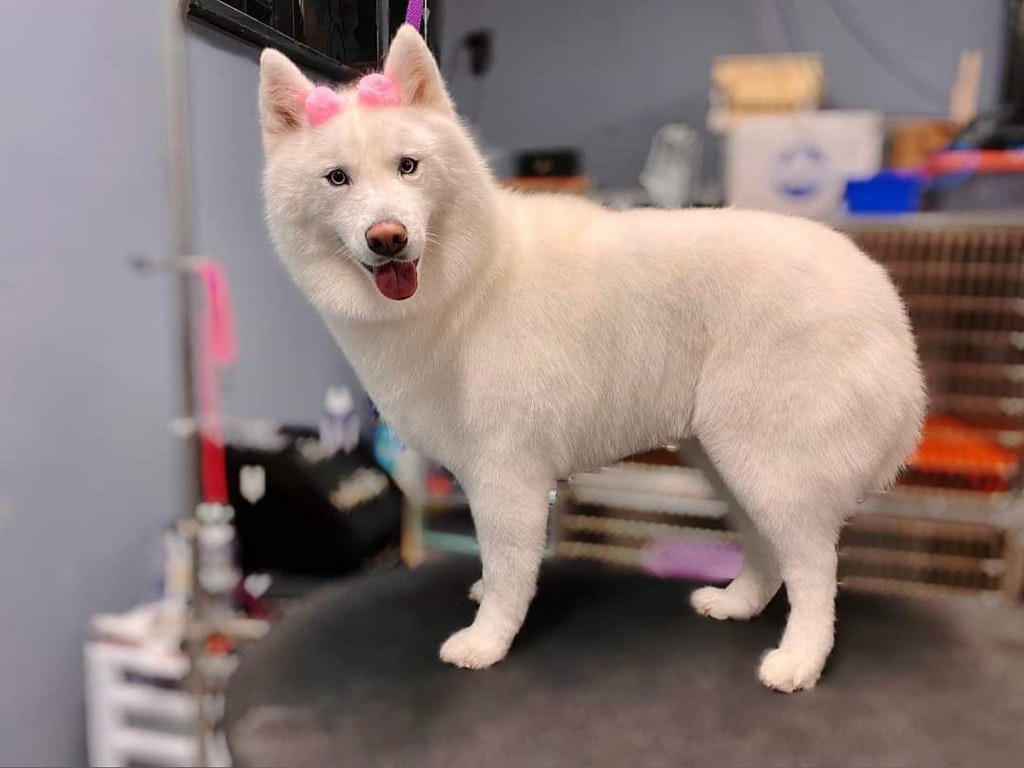 “That means all of our equipment, all of our policies, procedures, and all of our team members have been certified in the KC regulation for safety,” Shupe said.

Grooming prices depend on the size of the dog, the dog’s coat and what services are wanted. Some of the more exotic include a blueberry facial to brighten the dog’s face and remove staining from around the mouth, a mud bath that’s like a scalp treatment and, the most popular, a deshedding treatment that helps to lift and remove some of a dog’s coat.

Another popular offering that they’ve just resumed is creative grooming, using pet-safe dyes to color a dogs fur, sometimes just a bit and sometimes a lot. The service starts at $20 and includes designs such as cheetah prints.

Shupe said dogs and owners love it. While the dog is in the salon, they’re getting a lot of attention that feels like a massage and doesn’t smell bad, Shupe said.

“However, when they leave and when people see a dog with a pink and blue tail or a dog with with blue ears or blue or hot pink or red spots on their coats, everyone stops and comes over and oohs and ahhs over the dogs,” she said. “So they’re getting extra attention, extra love.”

Fur Baby has moved into raw food and biologically appropriate diets, which Shupe calls the best nutrition for dogs. Dry foods are about 60 years old, she said, and not a healthy pet diet.

“Your dog, your cat is not out in the cornfield, picking and cooking corn. They’re not killing a chicken and then going to bake it at a high temperature,” she said. “We’re the first to really bring it back and on a retail level talk about raw nutrition that is species appropriate.”

They have three freezers stocked with lots of different kinds of raw food, including some lightly cooked. It includes things like chicken feet and even sardines.

The two raw diets include a prey diet, in which pets eat a whole animal as they would in the wild, and a BARF diet, which stands for biologically appropriate raw foods or bones and raw food, as well as 5 %to 10% added fruits and vegetables.

“If your dog was in the wild, it would be killing animals and only animals,” Shupe said. 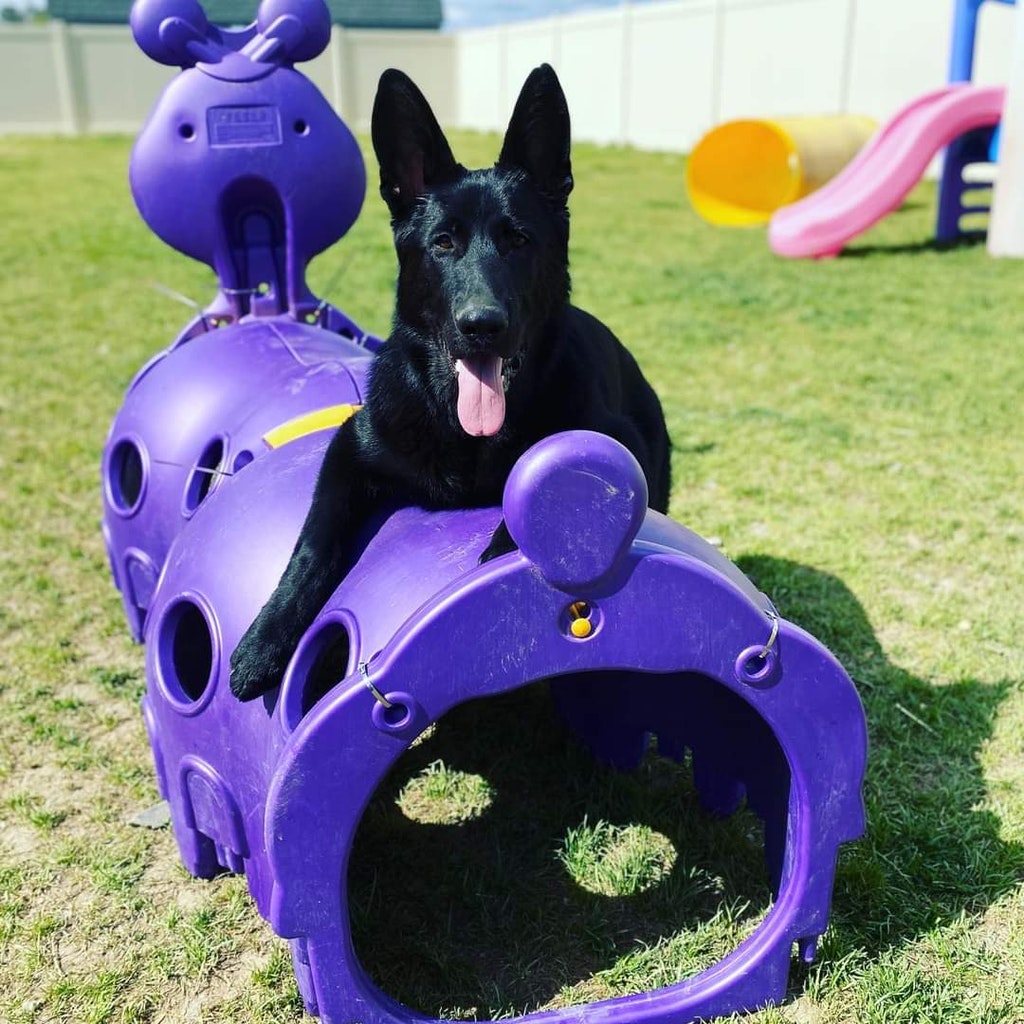 Outdoor play is encouraged and the dogs are divided into groups depending on size, age and personalities.

She doesn’t just zip over to Mountaire Farms and ask if they have any extra chicken feet. Fur Baby only stocks public brands that have been safety tested, including Primal, Tucker’s and Steve’s.

The raw food changed the way Peggy Reilly looked at nutrition for Maddie, whose meals are a mix of dry and raw food.

“Where in the past I might have gone to a grocery store or a big pet store,  I’ve learned an incredible amount from Sherry on what is good and what is not good,” Reilly said.

Shupe said the store’s overall business has been picking back up in recent months, especially as people start to travel more.

“We’re still only at about 30% to 40% capacity. So it’s still slow. Slower than what we had hoped for moving into this great location and coming out of 2020,” she said. “But every day we have new members joining us. ”

Fur Baby now also boards other kinds of animals in their own suites, such as guinea pigs and hamsters. “We have all sorts,” she said.

Shupe said she some day would like to add a second Fur Baby location.

The best part about the business, she said, is watching the change in her furry guests as they return.

“We get to watch them from their first day, a little bit shy and unsure about who we are and what we’re doing, to pulling their owners in through the door, excited to see us.”