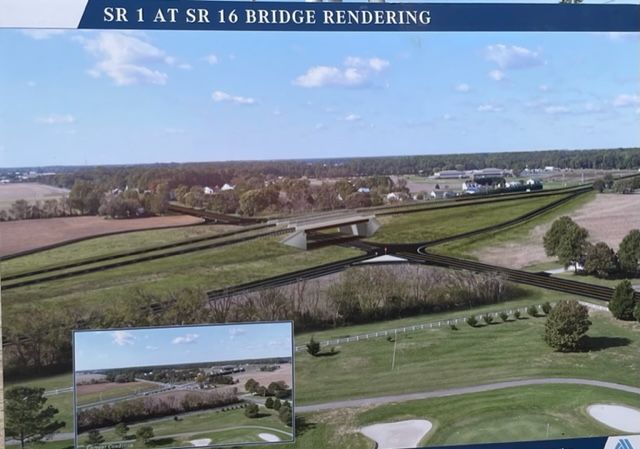 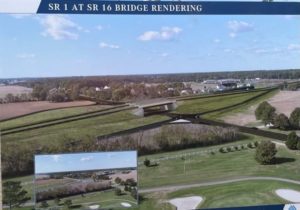 The last traffic light between I95 near Wilmington and Route 9 in Lewes will be a thing of the past once a grade-separated intersection is completed at Route 1 and Route 16 in Milton. Ground was broken for the project on Tuesday, June 21 after comments from Governor John Carney, DelDOT Secretary Nicole Majeski, Senator Dave Wilson and Representative Steve Smyk.

“Since 2009, the department’s completed seven grade separated interchanges along the Route 1 corridor south of Dover and this project is another step in our work to limit the number of access points for vehicles to enter and exit the highway as part of our commitment to safety and a part of our corridor capacity preservation program,” Majeski said. “Safety is also something that we talk about every single day and this project is going to enhance safety. This intersection has one of the highest crash rates along this entire Route 1 corridor. So, the improvements that we’re going to be doing here are going to be are going to be critical.” 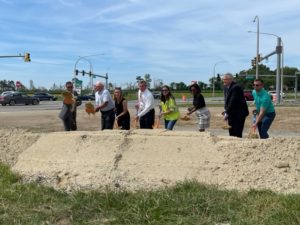 Majeski continued that the project would consist of elevating Route 1 over Route 16 with new dual bridges to provide access, free flowing movements, northbound and southbound entrance and exit ramps as well as new turn lanes and the realignment of Route 1 and Deep Branch Road. She also pointed out that Fiscal Year 2023 would begin in two weeks and the department had the largest capital project plan in the history of DelDOT at $610 billion with over $1.3 billion worth of work planned for Sussex County. Majeski joked that an “orange barrel would be coming to a road near you.”

“Back in March, I made a bet with Governor Hogan over Maryland that the University of Delaware women’s basketball team would beat the University of Maryland women’s basketball team. I don’t know how many of you saw the game, but the Blue Hens didn’t do so well. We lost the game and just a week or so ago, on a Sunday, I went down to Dewey beach to pay off my bet to Governor Hogan and bought him a crab cake. That is what the stakes were, either a Delaware crab cake or Maryland crab cake and so we bought him one at Woody’s,” Governor Carney said. “We had a really good time, but as I was sitting there, I was reminded about what an attraction our Atlantic and Delaware Bay beaches are to folks from out of state. Governor Hogan got more attention at Woody’s than I did. Most of the people there were from Maryland or from out of state. And we know that folks focus on how long it takes them to get from Baltimore, Washington, New York and Pennsylvania, New Jersey to get to our wonderful beaches and that’s why we have this wonderful SR route one which increasingly has very few red lights and little in the way of getting our tourists to the beach communities during the summer and actually year round.” 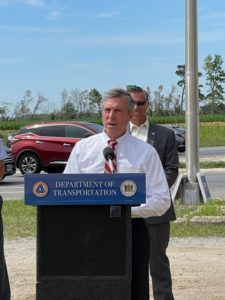 Governor Carney pointed out that the time it took to get to the beaches was not as important as getting there safely.

“This will make it possible for our visitors to get to the beaches even quicker. More importantly than that, of course, is that this project will address safety issues, some of the biggest safety issues along the Route 1 corridor with the accidents that occur here at the light and obviously very important to the economy of our state,” Governor Carney said. “And so, I want to thank all the partners all the folks at DelDOT Secretary Majersky mentioned our project manager or chief engineer, all the folks that make it happen, certainly our federal partners, as was pointed out, these kinds of projects are 80% federally funded. Senator Carper, Senator Coons and Representative Blunt Rochester are part of that. One of the things that we’re able to do in Congress for the six years that I was there were these kinds of projects where their infrastructure is important to every congressional district across the country, one where an issue where Democrats and Republicans are able to work together to get things done. “

Currently, Delaware’s General Assembly is finalizing the 2022-23 budget, one that is larger than any in the history of the state. Passing the budget will be a challenge in itself, but once it is passed, Governor Carney pointed out that there will be an additional challenge to find the engineers and planners to complete all the projects in the bond bill. He pointed out that the Route 16 overpass was not scheduled to be completed until 2025. Senator Wilson pointed out that, once the grade-separated intersection was completed, it would be safer for those traveling to and from Broadkill Beach, into Milton and for the fire department and ambulances.

“You know this is a big deal and we need to move forward. You know, when we look at our budget, the money we spend, 80% of this is federally funded and anytime we can get money out of Washington to make something happen in Sussex County, I’m all in favor of it,” Senator Wilson said. “So with that, I’d like to say our second industry in Delaware, number one is agriculture, number two is the resort area. And we need to be able to get people to the beaches faster and safer. It’s not about how fast you get here, but how safe you get here. And we want people to have a great experience coming to the first state. Our beaches are wonderful, what we have here in Sussex County, and I just want to see this continue.”

Representative Smyk reminded everyone that it was the state employees that made projects like this possible, explaining that they complete many of these projects in workdays that are much longer than eight hours.

“We ask them to do more with less constantly, and these people are treasures to all of us. Thanks to all the state employees that are here today. Thanks to the governor who we must recognize that out of his all the many things that could be in his schedule, the very many important things, especially in our time of June, the most important time of the year, that he comes down here and he must he wants to make sure that you know how important this is,” Representative Smyk said. “Because this is actually going to save lives. This intersection, I have actually investigated the safety of this intersection and how many people here in crashes have died, it’s sad how many that occur at traffic lights. This is a great step forward for safety for everyone that comes here and goes through this intersection A lot of people come through here, so thank you very much to the DelDOT employees that had the wherewithal to make this happen. We have contacted our emergency services, we had Milton Fire Company and other fire companies in the surrounding area coming out and talking about how their apparatuses that they currently have and any future apparatuses and how they can get through these mazes of highways. And it’s very important that they know that they have a voice in our state legislature.”