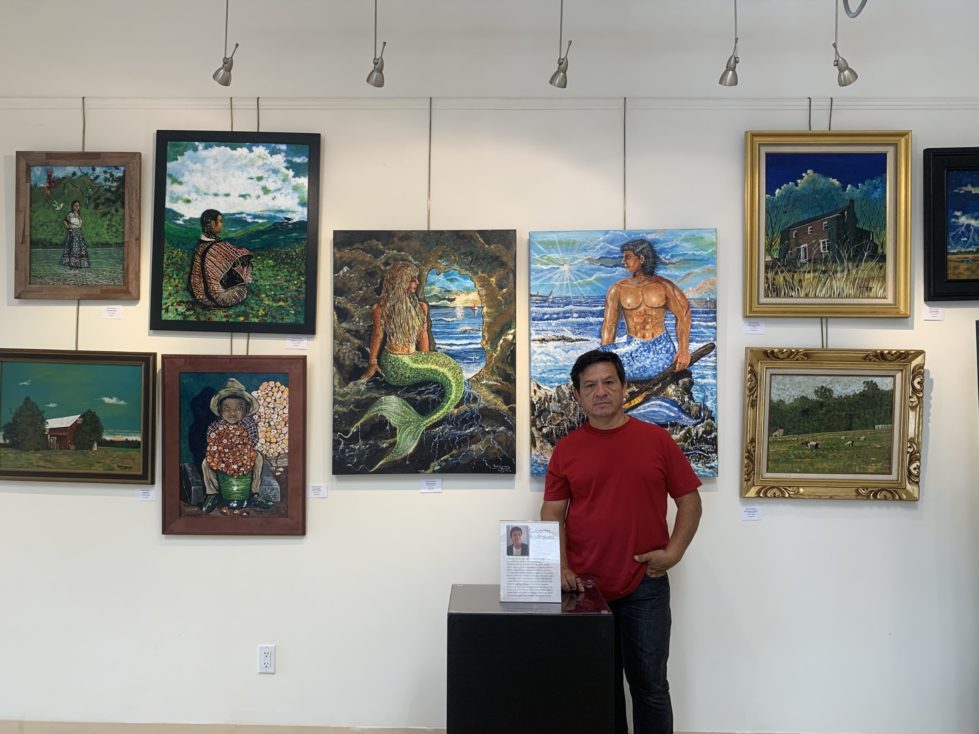 Gilberto Rodriquez’s portraits, landscapes and painted mannequins will be on exhibit at the Mispillion Art League through Aug. 7

The first person to ask Gilberto Rodriquez for one of his art works was his kindergarten teacher, right after she scolded him for drawing in class.

Rodriguez, who lives in Ellendale and has an exhibit at the Mispillion Art League, has been creating since he was in a Mexican elementary school, doing more drawing than studying.

One day, his kindergarten teacher caught him sketching and asked him to stay after class.

“She goes, ‘Lemme see again?’ and then she goes, “This is story class, not art class. Stop doing that in class,” Rodriquez remembers. “I said okay, and then she said, ‘Can I have it? Very good.’”

The sketch was of his teacher. She also asked him to sign it.

As he aged, he turned to painting and now an exhibit of Rodriquez’s work runs until Aug. 7 at the art league’s Milford gallery. It features portraits, landscapes and painted mannequins.

The artist moved from Veracruz, Mexico to California in 1995. There, he worked for his sister’s movie rental business, but he didn’t like California. Then a cousin invited him to come to Delaware.

“I said, ‘What is Delaware?’ In Mexico we have a tall drink called Delaware Punch. That’s all I knew,” he said.

Rodriguez decided to move because of the First State’s proximity to New York. When he arrived, he worked a landscaping job.

At the time he didn’t know any English, which made working with people who knew only English difficult. He said coworkers were kind, helpful and taught him some English. Eventually he decided to take English courses at DelTech, biking from his house to the Georgetown campus three times a week for two years.

Today Rodriguez speaks English well, but his heritage shines through in an accent and sentence construction.

Gilberto Rodriquez covered this mannequin in images related to his native Mexico.

This Gilberto Rodriquez piece is covered in depictions of Delaware wildlife.

He rarely stops painting. He even considers it somewhat of an addiction.

During the day, he works as a house painter. Nearly every day when he gets home from work, he goes to his small studio and paints his own works.

“You can see me painting around 3 o’ clock in the morning. That’s all I got,” Rodriguez said. “Almost every day. I can’t stop.”

While Rodriguez is inspired by his surroundings, his identity as a Mexican American and Delawarean shine through.

Rodriguez recalled feeling nervous the first time he entered the Mispillion Art League because he was the only Latino person there. He’s now been a member for five years.

“I like that he does everything,” said Winifred Way, a Dover artist who specializes in watercolors. “I also like that he’s not doing typical Delaware art. He’s doing what he was raised around. I think he’s a true artist.”

The way Rodriguez speaks of painting reveals a deep love for it. He reads about art and artists and collects original works from artists that he loves.

Rodriguez says that he feels most connected to Vincent van Gogh but also very much loves the work of Frida Kahlo, Diego Rivera and the Wyeth family.

This banner, used at Gilberto Rodriquez’s daughter’s 15th birthday, is his favorite piece.

His house is filled with paintings, mostly his own. There are so many that he gives paintings away to friends.

“I’ve been painting for too many years. I’m not the best. I don’t wanna be the best,” he said. “I don’t really care. I’m just doing what I like.”

Rodriguez hopes to one day see his favorite work of art in a museum.

That piece was created on a large floor covering he had used at work to protect floors from paint droplets. The canvas was covered in paint, then circles were painted on it to represent his daughters’ love for old records. Finally, the likeness of Frida Kahlo was painted in the center.

This piece was draped on Rodriguez’s home as a decoration for his daughter’s 15th birthday celebration.

An image of it does not do it justice.

While Rodriguez’s paintings vary in style, form and subject, one thing remains the same: three dots on each painting, representing his three children.

Most recently Rodriguez has taken on a large mural project in Seaford, 100 feet by 40 feet, which he says will take him months to finish. He has done other murals around the area, including one on the outside of the Arenas in Milford and another inside the Georgetown library.

His advice for budding artists is simple: “The thing is don’t stop doing it, just keep doing it.”