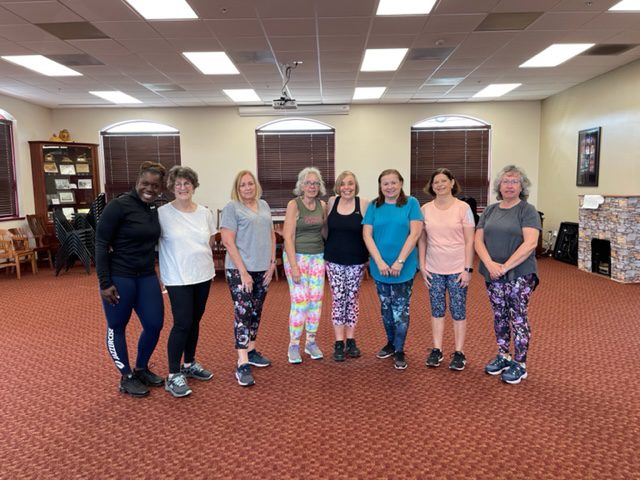 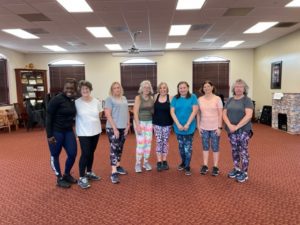 The Jazzercise group that meets at the Milford Library on Saturdays came together with a goal of getting fit using the well-known exercise program. Over time, however, the members have created a group that not only supports each other, but provides support to the local community as well.

“So, there’s a community within Jazzercise. We like to do a lot of things together. There are lunches, there’s coffees and book clubs,” Glenenise Parks, who leads the Jazzercise class each Saturday, said. “I think that’s testament to how you know how wonderful the program is, is that it’s been over 50 years, you know, it’s been going, I mean, how many programs can you say has been going on that long? And the question is why, right. And a lot of it has to do with what you see within our group, which is it’s a diverse group of women that get together they have fun. We support one another.”

Parks explained that the group has a strong desire to support the local community. Over the past few years they have raised $3,505 for the Delaware Breast Cancer Coalition and a recent Jazzercise Glow Party held at the Milford Senior Center raised $652.

“I had talked to someone at the Milford Senior Center about some things they were doing and they reached out to me explaining they were trying to raise money,” Parks said. “And the only way that I know I can contribute is with Jazzercise. We can do a glow party as a Jazzercise fun day. You know, we all work out have a great time. And for every $10 that everyone else contributed, I matched that.”

The group held a coat drive for South Dover and were able to purchase 100 coats valued at $3,000. They donated toys, food and clothing in Milford and Dover to Code Purple with a value of $850. Members knitted scarves, hats and gloves for Caring Hearts Helping Hands. The Jazzercise group has donated funds to Girls on the Run and every year instructors do warm up routines prior to that 5k. Parks gives a free 45-minute Jazzercise class to children on Monday nights at the Boys and Girls Club. Their support is not just limited to outside organizations, however.

“I’m the featured artist at Peninsula Gallery for the month of March,” Rosemary Connelly, who attends the class, said. “And so, when I told someone, she organized a carpool and about 14 women came down. It was like a Jazzercise field trip. We had lunch and it was just a really fun.”

Parks pointed out that all the people in the class have a strong need to give back, explaining that not only did she volunteer at the Boys and Girls Club, but that Connelly volunteered at the Mispillion Art League.

“So that’s all the things that you see and I mean, we support one another and enjoy each other,” Parks said. “But also, I mean, unfortunately, there’s things that happen where we need support, with deaths, illnesses, that kind of thing. We get together for that as well. Cards are given out, emails just to see how you’re doing, phone calls. It’s a full support system. It goes beyond the health aspects of Jazzercise. It’s full circle. Mind, Body and Soul.”

Jazzercise is held the third Saturday each month from 10:15 to 11:00 AM in the Lion’s Room at the Milford Library. The cost is $10 cash per person or search www.Jazzercise.com for Milford Library to pay in advance.