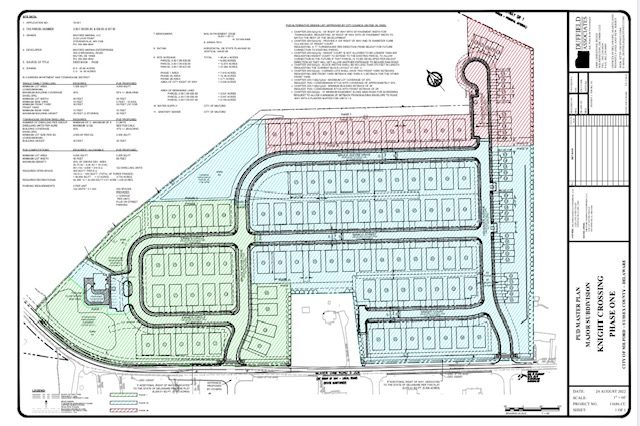 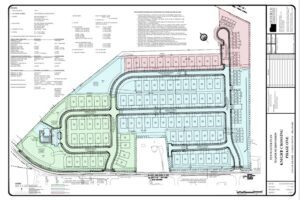 Milford City Council approved a final subdivision plan for Knight’s Crossing, a development which will be located on Beaver Dam Road. The development had previously been denied as they requested single family units to be only 10 feet apart. The developer redesigned the project to allow for the required 16 feet, requiring them to reduce the number of single family homes and increasing townhomes by five.

“The rest of the conditions are met,” City Planner Rob Pierce said. “The six clusters of townhouses flanked the southern side of the property were shifted slightly to the west. Another cluster of five townhouses were added at the end of the cul-de-sac to the east.”

Mayor Archie Campbell asked Benjamin Culp, an engineer with Duffield Associates if there were any plans to widen the roadways. Culp explained that they had gone through DelDOT approval and were planning on adding turn lanes as well as widening sections of the road. Councilman Dan Marabello asked how extensive the landscaping was in the development.

“It meets Milford code, and all of our ponds are also landscaped,” Culp said. “We have an extensive buffer on the right hand side. If this is approved tonight, we are hoping to get started on Phase 1A which is already approved.”

Councilman Mike Boyle pointed out that council had recently approved a development where there were some environmental concerns.

“We’re getting near the river and undeveloped land that has been overgrown,” Councilman Boyle said. ‘Was there a survey done or have you contacted DNREC about the existence of an eagle’s nest, an active eagle’s nest?”

Culp explained that the property had gone through the PLUS system which includes a DNREC review and that should trigger a native species comment. Pierce stated that there were no comments related to an endangered species. There was a question about a previous development, but it turned out the eagle’s nest was not located on the property in question after all.

“I think the issue with it is we ought to consider that it’s not where the nest is located,” Councilman Boyle said. “It is the distance from an active nest to a construction site. And, depending on the time of year, the distance varies 300 to 600 plus yard, or I think, feet. It’s not just a DNREC regulation, it’s a federal law that has to be taken into consideration. And as we get into t hose areas that are heavily wooded and closer, especially to wetlands and rivers, it needs to be something that we will look at. There has to be some comment from DNREC that the area does not contain any active nests.”

City Solicitor David Rutt explained that the criteria were not in the code and if council wanted to ask for that information, they would have to pass a code amendment to do so. He explained the burden is not on the applicant to check whether there are active nests. He also stated that if the applicant meets all the criteria under the code, council is required or obligated to approve the plan. Council had the right to add a bird survey as part of the process, but it would need to be added as part of city code. Pierce explained that the PLUS process was very detailed.

“On the other one, they did miss it,” Councilman Andy Fulton said. “Well, they didn’t miss it. They thought they missed it and then discovered it wasn’t on the property or within the boundaries.”

During the public hearing on the development, two residents who lived near the proposed area spoke against the plan.

“I live across one from this property,” Lucius Webb said. “It’s really a question more than a concern. I see no plans for any bike path or anything to accommodate that because the road to Slaughter Beach from Milford is highly trafficked road by people who want to stay fit which includes a few of you. You hear you all should want to stay fit and use a bike, but there’s no plans, no responsible behavior on the city of Milford to include bike lanes on the edge of a development and I encourage you to think about that. Also, I think you should think to the past and know the history of this property. It was the James farm. And Mrs. James was a sister to Hugh Rodney Sharp and he was a gentleman who restored Odessa and he was a big time guy at DuPont and his people came and designed the landscaping around the James home on that property. The landscaping remains the home does not. So, you asked what you should preserve besides eagles, and also think to the future. What are these people going to do. There is no golf course, you did not preserve that.”

Brenda Watson asked if this would be a 55 and older community as was previously stated as well as whether there would be an entrance into the development from Route 36. Culp explained that he did not believe this would be a 55 and older community and that there was no plan for an entrance from Route 36. Pierce stated that there was a residual piece of land between the development and Route 36 which is why there were not plans to put an entrance from that road.

“Something I want council to consider in the future,” Councilman Todd Culotta said. “We’re. here tonight to vote on this because we denied the application before with five foot setbacks on each side of the house for a total of ten feet between structures. We talk about affordable housing, and we need to consider this because those criteria add to the cost of the home. I will say yes, and I do appreciate the modification, but we need to consider that in the future.”