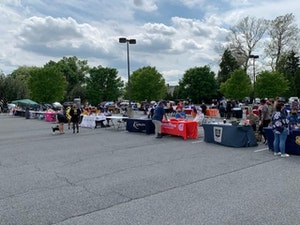 On Tuesday, May 3, Milford High School held a job fair outside the school, with about 40 employers who were seeking applicants for open position. The district reported that about 140 people attended the fair, which was open to the public as well as students for three hours.

“It has been very difficult to find applicants,” Effie Williams, District Manager of Rack Room Shoes, said. “We have had a few good applicants today and we are very happy to have engaged with people who are looking for work.”

According to their website, Rack Room Shoes has several openings at their Rehoboth Beach location, including sales associates and team leads. Starting salary for sales associates is around $11 per hour and for management positions around $14 an hour.

“We are struggling to find qualified applicants,” Georgia, a recruiter with Bayhealth, said. “We have hundreds of openings between our Milford and Dover campuses, including part-time, full-time, per diem. One of the biggest issues we are seeing is a lack of a high school diploma or GED which all of our positions require. We also want applicants who have demonstrated reliability in previous positions.”

Although some of the positions available at Bayhealth require advanced degrees, many only require a high school diploma or GED. Front office assistant positions listed on the website have starting salaries of $14.67 per hour while a cook position has a starting position of $14 per hour. Many positions at Bayhealth also include benefits like medical, dental and vision insurance.

“I used to have people stopping in my shop a few times a week asking for an application, now no one is coming in,” Mike Bayer, General Manager at Burke Equipment, said. “We need mechanics and CDL drivers and have advertised as much as we can to try to get them to apply. We are looking for experienced staff but also entry-level. If someone comes in and has tools and some knowledge, we will send them to training to become a mechanic. When we find a good applicant, we are willing to invest in them. We just can’t get people to even apply.”

The Burke Equipment website lists several open positions and, although the site does not mention a starting salary, just notes that salaries are “competitive,” positions listed offer benefits, including a retirement plan with company match, dental and health plans, uniforms and continuous training. All applicants must pass a drug screening and background check. According to Payscale, the average salary for a diesel mechanic in Delaware is between $22 and $27 per hour. Salary averages increase the more experience a mechanic obtains.

Some companies at the job fair were looking for casual seasonal employees, such as Playland while others were seeking full-time help. Jesse Parsley, Principal of Milford High School reported that some high school students were interviewed and hired on the spot. Dr. Kate Marvel said that this job fair had twice the attendance of previous fairs held in late 2020 and early 2021.

According to the Department of Labor, Delaware’s unemployment rate as of March 2021 was 6.5 percent, up 36 percent from March 2020. Yet, many businesses claim they are having difficulty finding employees. Some have begun offering signing bonuses for qualified applicants. PepsiCo is offering $25 per hour plus a signing bonus to those who are hired in certain positions. They also offer bonuses to employees who refer someone who is hired as well as retention bonuses. Many companies looking for CDL drivers are also offering competitive pay rates and signing bonuses, many starting drivers at $20 or more an hour.