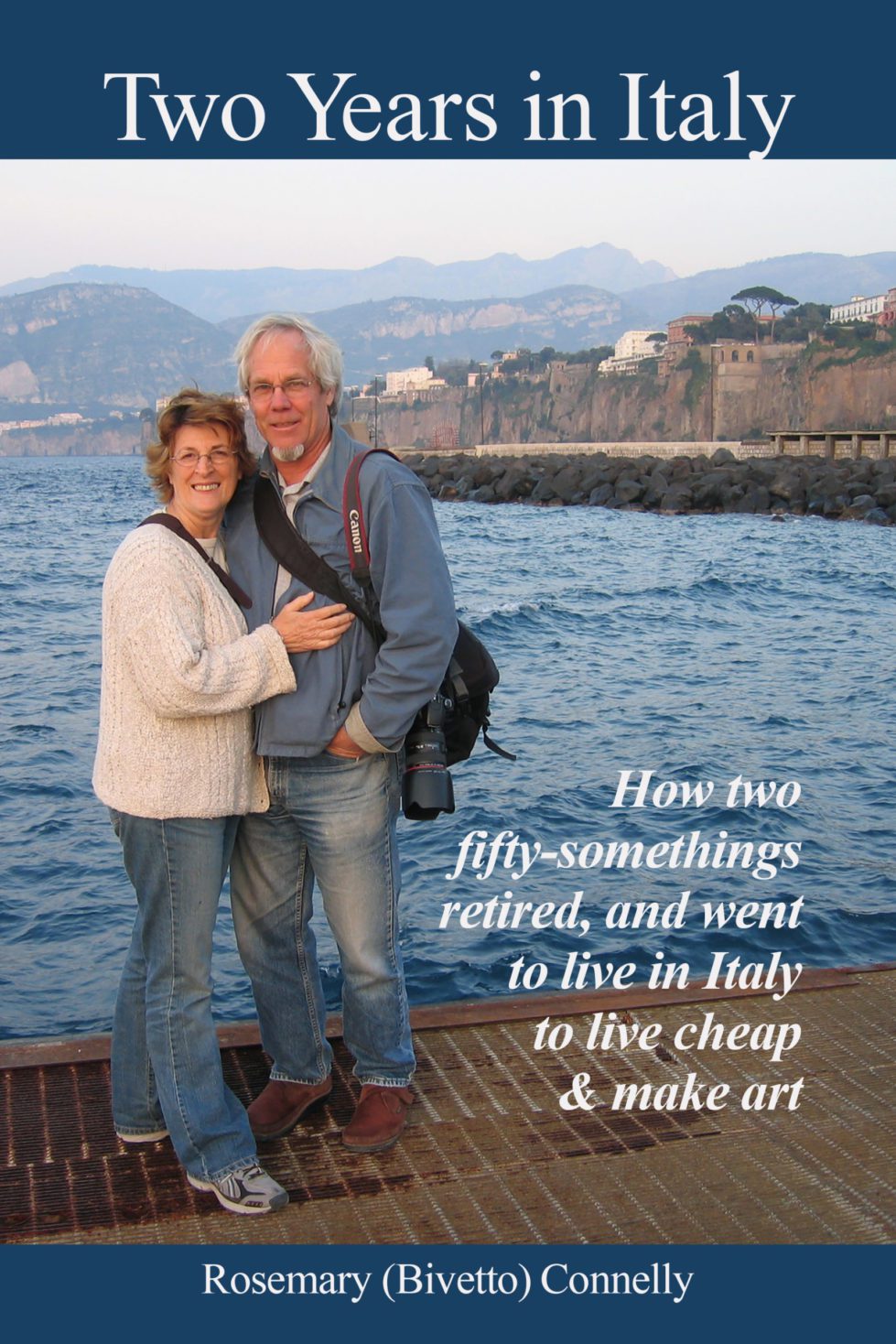 One of the themes of Rosemary and Bob Connelly’s married life was to “live cheap and make art.” The couple always enjoyed traveling and knew that when they did retire, they would want to visit many exotic places, leading them to live frugally while living and working in Phoenix in order to be able to spend their retirement years making art and traveling. When their children grew up and left home, they traveled to many different places, including England, Ireland, Germany, France and Italy, just to name a few. What they realized was that a two or three week vacation was simply not enough time to enjoy an area.

“We started thinking, wouldn’t it be really cool if you could spend more time in a place because two or three week vacations just weren’t long enough, right? And we just had this desire to experience life in another culture, and learn what’s it like to live in another country?” Connelly said. “Because my grandparents all, well three, at least were born in Italy. One was born in New York, but her father was born in Italy. So, I’m 100% you know? And so, I wanted to go there. I wanted to experience life, to go to the towns where they were born and take the time to research, find ancestors and look for roots and that sort of thing. So, Italy because we loved it anyway. And it had that that connection to my family roots that it just had to be Italy.”

The Connelly’s packed up and moved to Italy, spending two years in four different Italian regions. This adventure is now a book, Two Years in Italy, created from a blog Connelly kept while they were living abroad. Connelly wanted to have something she could hold in her hand, but she also wanted to provide information to friends, family and others who may travel to the region.

“It was it was really just something I wanted to have, and I and I wanted to share it with people who know me and who would be interested in following it and also people who are interested in travel,” Connelly said. “It’s just lots of lots of good information in it about places to visit and things that you can do that most people might not even know about, because living there and meeting people, like we had our landlords who were lifelong Italians took us places and showed us things that most tourists probably wouldn’t even know about. It was it was quite an amazing thing and to be able to share that with people who love to travel and who might get something out of it.”

Connelly found writing the book to be emotional but cathartic

The couple spent about six months in each of the four regions of Italy. They started their adventure in Umbria, which she said is known as the “Green Heart of Italy.” It is close to Tuscany which most people are familiar with. They lived in a hill town known as Perugia, a place chosen because the Connelly’s knew they would not immediately have a car. The town had buses and trains that would allow them to explore easily. It is also an area with schools which meant they would be able to find a furnished apartment easily since landlords catered to students. It also meant that language classes were readily available. From Perugia, the Connelly’s traveled to Sicily as that was where Rosemary’s grandparents originated.

“We found just the most wonderful apartment and landlords; it was right on the Mediterranean Sea. We could just walk across to the beach. It was awesome,” Connelly said. “And so then from Sicily, what we did was we were north in the summers and south in the winters for a couple of reasons. One, it was cheaper to go south in the winters and weather was better in the north, we expected it to be colder, not as good as it would be in the south through the winter. It was still cold but not nearly like when we left Perugia for Sicily, it had snowed already and by the time we got to Sicily, we were just in in sweaters.”

Once they left Sicily, the couple then traveled to Verona which is near Venice. Connelly pointed out that although all the places they stayed were in Italy, they were each very different from each other, from the architecture to the food. After Verona, the Connelly’s went to the Amalfi Coast, staying in a town called Vietri Sul Mare. Although they had always planned to stay just two years abroad, the birth of a new granddaughter helped pull them back to the United States.

“In the middle of our planning, we suddenly became grandparents. So it was really a challenge to say, oh my gosh, what do we do? Do we go?” Connelly said. “We were living in Phoenix at the time and my son and this new baby were in Richmond. So, we thought, you know if we stay in Phoenix, we won’t get to see her that often anyway. And so, we kind of made the sacrifice to go because we’d had this plan for so long and everything was in place. But that was another reason for us to come home. I mean, we have two children. My son had this great new baby and, we still other family back here. Right? We never planned to live there forever.”

Writing the book had its challenges, Connelly explained. Because blogs are usually posted from newest to oldest, she had to completely reformat them into a reverse order. Connelly’s husband, Bob, passed away in 2015, which meant reading some of the passages were difficult, but Connelly also felt it was cathartic.

“Just going through that again, and the memories of what we did and, and all the details. I’m so glad that I wrote as much as I did. Because you know how it is later, you don’t remember everything,” Connelly said. “So I’m really glad that I was as prolific as I was. And because it was so immediate, you get a sense of the of the excitement that I felt just every day. Every day we had the, the attitude that we were just going to enjoy whatever everyday brought to us. And we said yes to things we weren’t even sure what we were doing. Our landlords and friends would say we’re going to do such and such we’re going to this place, why don’t you come along with us? And we were like sure. We’re not sure exactly sure what, but we’re gonna try it anyway. It was just saying yes and appreciating everything that came in front of us.”

The book is written in a journal format and each passage gives a sense of the excitement Connelly felt as they prepared to try something new as well as the plans made as their adventure unfolded. There is a map of the country with locations pointed out as well as an introduction that explains why they chose to spend two years in Italy. A prelude includes excerpts from Connelly’s handwritten journal with details on planning for the trip and the couple’s excitement about “leaping off that cliff and leaving America for foreign countries.” The book also contains some of Connelly’s original artwork as well as photographs, many taken by her late husband, a talented photographer.

“We weren’t really fluent. We had a little bit of Italian in our repertoire you know, in our experience, but weren’t really fluent,” Connelly said “So we knew we were going to take classes at the school for foreigners there and we knew that that there was a lot of English spoken and that’s another reason to start there. There are four chapters, so each of the places is its own chapter.”

The book is available on Amazon in both paperback and Kindle eBook formats. Connelly is holding a reading at the Mispillion Art League on Thursday, May 26 at 6:30 PM. Books will be available for sale at the reading.