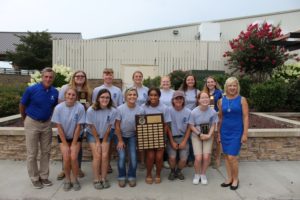 At their regular monthly meeting, Milford School District Board of Education recognized the achievements of the district’s Future Farmers of America (FFA) members. Chapter officers presented their achievements to the board.

“We are very proud of all the success we have had in our competitions,” Hannah Hague, MHS FFA President, said. “We had 43 members compete in state CDE/LDEs this year and eight students were awarded FFA jackets from the Delaware Farm Bureau. Three received state proficiency awards and four received Delaware FFA state degrees. We also had a Living to Serve grant recipient and took the first place National Chapter Award in the state.”

Natalie Armstrong, FFA Secretary, talked to the board about the community events the group participated in over the year.

“We participated in the Riverwalk Freedom Festival,” Armstrong said. “This is absolutely my favorite. I love the looks on children’s faces when they see live animals and I get the chance to teach children about live animals.”

Phillips provided the board with details on the National FFA Convention.

“We had eight students attend the National Convention,” Phillips said. “Our Marketing Plan Team won silver while our Food Science Team won bronze. We had two American Degree Recipients and we were ranked a National FFA 3-star chapter. It was a really good experience to have. We got to see the new national officer team elected. One is from Delaware, Jackson [Sylvester], so that is a great honor for a team as small as Delaware. With the crazy year and a half we have had, we could not have done any of this without the support of the board.” Sylvester, a graduate of Lake Forest High School and a student at the University of Delaware, was elected National Secretary of the organization.

Superintendent Kevin Dickerson commended the organization for their success.

“We are very proud of what our FFA chapter has done this year,” Dr. Dickerson said. “We congratulate all of you on your accomplishments.