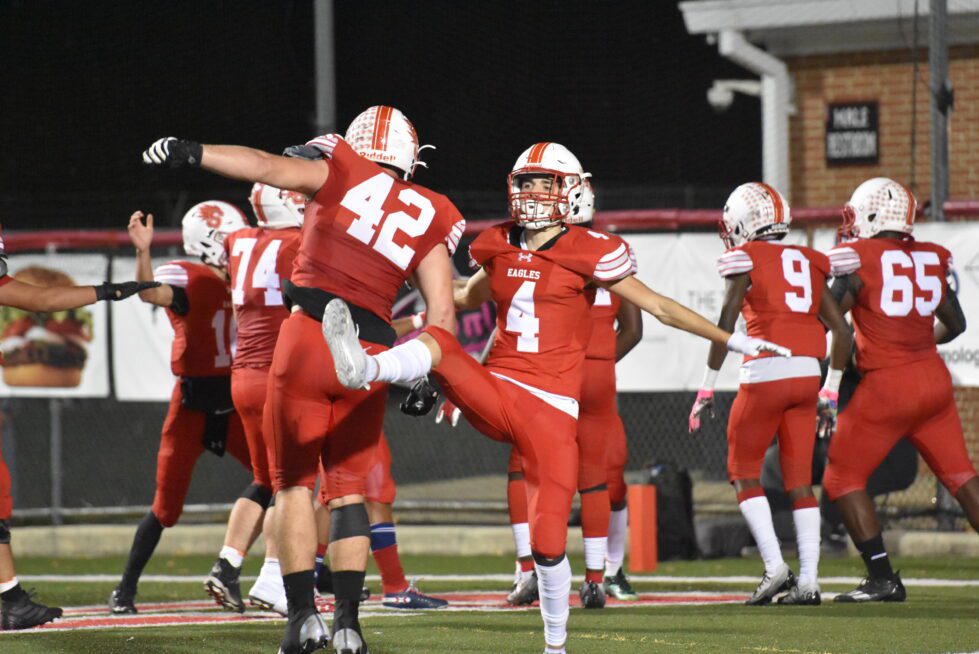 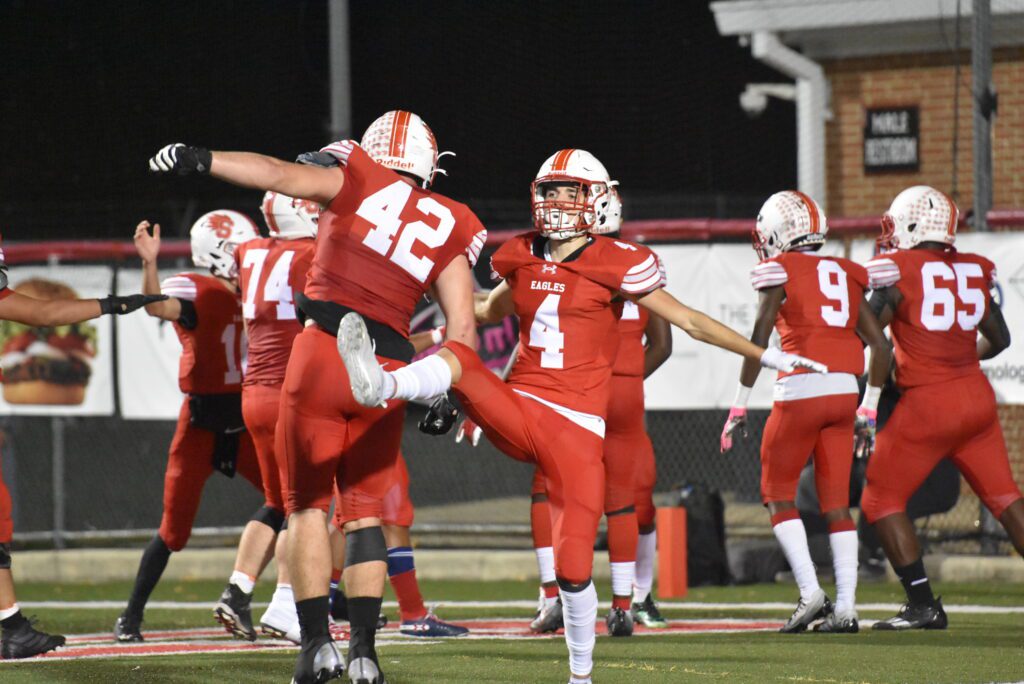 Smyrna – The Smyrna Eagles honored 22 seniors on Friday night prior to their season finale hosting District 2 foe Cape Henlopen. The Eagles came into Friday night’s game the winner of seven straight having outscored their opponents 246-80 and only trailed once during that stretch. But the Eagles found themselves facing an early deficit just four plays into the game.

Cape Henlopen took possession at the Smyrna 26 yard line after the Eagles failed to convert a fourth and two. Two plays later Maurki James went up the middle 21 yards for a touchdown. Ingerski’s kick was good and the Viking jumped out to a quick 7-0 lead.

“When you play with fire you sometimes get burnt, we took a chance there and that is a tough team and they made us pay,” Smyrna head coach Mike Judy said.

But the next 22 minutes belonged to the Eagles. Brian Wright connected with Nolan Fretz in the endzone for a nine yard touchdown pass. Yamir Knight’s conversion run put Smyrna in front 8-7 with 5:30 left in the first quarter.

The second quarter began with a 44 yard touchdown run by Knight, Knight followed with the conversion run giving the Eagles a 24-7 lead.

Following a long delay after an unsportsmanlike penalty called on the Smyrna bench that moved the ball back to the Smyrna 26 yard line. Wright and Joshua Gueh hooked up for a 61 yard pass play, the next play Wright found Fretz open for a 13 yard touchdown pass. Kasyir Lee converted the run as Smyrna took a 32-7 lead into halftime.

Wright finished the game completing 13 of 28 passes for 214 yards and a pair of touchdown passes to Fretz.

“Nolan is a good receiver, we have some good chemistry now and we just hit it when it’s there,” Wright said.

The game took an odd turn in the third quarter as Cape was penalized for returning to the field late for the second half. The Vikings then moved the ball out to their own 24 yard line. On fourth down Smyrna blocked a punt and Driver scooped up the ball and returned it for an apparent touchdown. Smyrna was called for an illegal block in the back. The Eagles began their drive from the Cape Henlopen 15 yard line.

After a pair of incomplete passes Markell Holman ran the ball inside the ten yard line, but the Vikings recovered a fumble keeping Smyrna from capitalizing on the blocked punt.

Cape Henlopen picked up another first down when Smyrna was penalized for unsportsmanlike conduct as the two teams were headed back to their respective huddles.

The officials then met with Smyrna head coach Mike Judy which went on for a couple of minutes when a second flag was thrown followed by a third flag. The game was delayed approximately ten minutes while the officials discussed the flurry of penalty flags. After a lengthy meeting Smyrna was assessed 30 yards in penalties.

Cape Henlopen then restarted their drive at the Smyrna 44 yard line. The drive stalled as the third quarter came to a close. A total of 70 yards in penalties were assessed against the two teams in the quarter while a total of 22 yards were gained between Smyrna and Cape Henlopen.

The fourth quarter began under a running clock agreed upon by both Judy and Cape Henlopen head coach Mike Frederick.

The fast paced final quarter saw Smyrna add a touchdown on an eight yard run by Holman and C.J. Fritchman had a three yard touchdown run on the final play of the game as Smyrna took a 40-13 victory on senior night.

Cape Henlopen dropped to 4-6 overall and 1-3 in Class AAA District 2. The Vikings will have to await their seed for the Class AAA state tournament after the DIAA football committee meeting on Sunday.

Smyrna improved to 9-1 overall and 4-0 in District 2. Smyrna will be the top seed when the Class AAA state tournament begins next weekend.

“Having the first seed and home field advantage is very important because triple A is a gauntlet,” Judy said