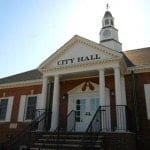 The City of Milford is beginning the process of updating their strategic plan. Photo Source: www.cityofmilford.com.

University of Delaware Fellow Melody Barger presented Milford City Council with details on the upcoming process for the strategic plan update. The last strategic plan was adopted by the city in 2017 and, since the city had reached the five-year mark from that plan, it was time to update plans for the city for the next five years.

“So this is just to review I’m sure all of council understands why we need an update for the strategic plan. But for anyone listening who is not aware our last strategic plan was adopted in 2017, which means that we’re past the five year mark,” Barger said. “We have also completed most of our priorities. Those priorities include, among others, the industrial park that we’re working on, the new police station that we’ve broken ground on, the sidewalk program and the street improvement program.” In addition, Barger explained that an updated plan was necessary so that staff could obtain guidance from council and residents on new priorities and projects.

The city contracted with the University of Delaware Institute of Public Administration to assist with the creation of the updated plan. The first step would be to schedule council retreats to set priorities. Once that was completed, Barger hoped to facilitate community conversations and coffee conversations in order to obtain resident input.

“And you might ask what is a coffee conversation? That is a brief, four question meeting with your constituents that you can do on your own to rather informally gather information from them,” Barger said. “So, the UD facilitators will explain more about that at Council retreats. We’re then going to address strategic plan updates, and then we’ll take Council comments and public comments, and then we’ll hold a public hearing and have final adoption.”

The timeline for the process would begin in October 2022 with council retreats. In November 2022, community and coffee conversations would be held to get resident input into the plan with additional conversations held in January 2023 in order to create a Community Rhythms Assessment. In February and March 2023, the University of Delaware and staff would create what they call a “heard document” that would categorize the information collected at the conversations and retreats.

“There will be another council retreat to review that document and we will then create a draft plan,” Barger said. “In April 2023, we will have a public workshop and formal presentation of the plan and, hopefully, adopt the strategic plan at that time.”

City Manager Mark Whitfield asked council to review dates in October when they would be available for a retreat.