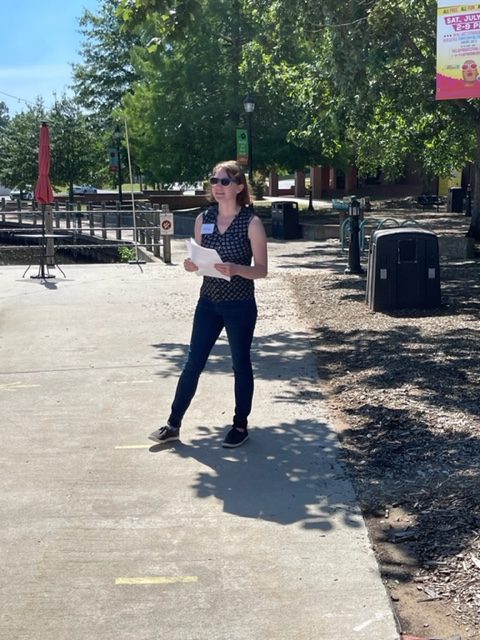 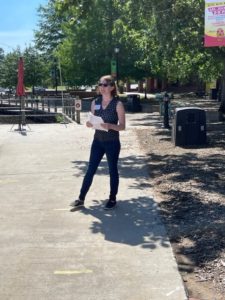 Nicole Rogers, Operations Director for Milford Museum, provides details on the history of the Mispillion

Delmarva Discovery Tours recently began offering “A River Runs Through It,” a history-eco tour along the Mispillion River. The tour includes stops at the Milford Museum, DuPont Nature Center and Abbott’s Mill. Recently, the Chamber of Commerce for Greater Milford (CCGM) and Delmarva Discovery Tours partnered to offer a special media tour in order to get information out to the general public.

“The tours are a collaborative effort between the DuPont Nature Center, the Milford Museum, Abbott’s Mill Nature Center and the Chamber of Commerce for Greater Milford,” Janis Markopoulos of Delmarva Discovery Tours, said. “The goal is to focus on the history of the Mispillion River, a resource that connects all three venues we visit.”

The actual tours, which are available every Wednesday through September, originate in the beach area and Delmarva Discovery Tours brings those who sign up to Milford in one of their vans. They have two available, one that seats 14 and one that seats 11. However, there are discounted tickets for those who live in the Milford area and meet the van at the Milford Museum. Each tour starts at the museum with a walk along the river where a tour guide will provide information on the history of the river and its importance to Milford. The media tour was led by the museum operations director, Nicole Rogers. After talking about the museum building itself, the group headed outside where Rogers explained the importance of the ladybug to the city of Milford and then heading to the Walnut Street bridge.

“This museum portion of the tour begins inside the Milford Museum, which is housed in the first post office built in town,” Nicole Rogers, Operations Director of the museum, said. “We then walk down to the Riverwalk where we talk about how the Mispillion got its name. We also provide information about the Lenape who used this area as their summer camp as well as William Penn who is quoted as saying the river was “a creed suitable for sloops of good berthen,” which translates to “boats that are big.” We then head across the Riverwalk bridge where we provide details on the shipbuilding industry in Milford. We allow for a lot of time for questions throughout the tour, too.” 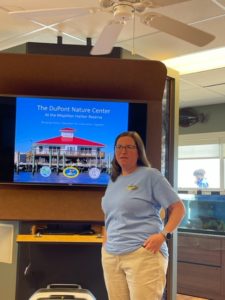 Once the museum portion ends, those on the tour are provided about an hour and a half to explore downtown Milford on their own. At that time, they can grab lunch, do some shopping or simply enjoy the Riverwalk. They return to the museum and board the van to head to DuPont Nature Center.

“At the DuPont Nature Center, we allow some time for photos outside as the views are so spectacular,” Lynne Pusey of the DuPont Nature Center, said. “We explain that this center is located on the mouth of the Mispillion River and the Delaware Bay. On one side is the river and on the other is Cedar Creek, both tributaries to the bay. We then provide some history of the area, including details on the Mispillion Lighthouse and the restaurant that used to be housed in our building. Those on the tour also learn about migrating birds who travel through our area as well as the massive horseshoe crab population that enjoy our area. After a short slide presentation, the tour participants can wander around the nature center to see hour exhibits, look at our osprey camera and just enjoy the beauty that surrounds us before they head to Abbott’s Mill which is located at the other end of the Mispillion.”

Upon arrival at Abbott’s Mill, the media tour group was greeted by Steve Childers who provided additional information about the natural beauty of the area. 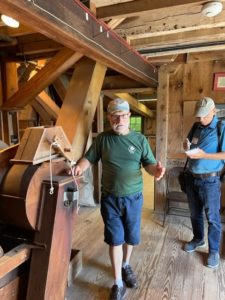 Steve Childers provides details on the operation of Abbott’s Mill

“We have several miles of trails out here and after the mill tour is finished, I hope you take time to take this short trail off the parking lot,” Childers said. “If you travel around Delaware, you’ll see ponds everywhere. They are all mill ponds. There are no natural ponds, and they all had a mill or, in a lot of cases, more than one. We are in the Mispillion River Watershed, and we have the least amount of water.”

There is an historical sign on the mill property that explains the mill was originally built by Nathaniel Whiley in 1795 who ran a sawmill on the location. In 1808, the mill was converted to a grist mill which was purchased by Ainsworth Abbott in 1919. According to Childers, Abbott had a fifth grade education but operated the mill with just one employee until the 1960s. When he purchased the mill, it used a water wheel to power the machinery, but because the water levels were so erratic, the wheel was replaced with a water turbine. After purchasing the mill, Abbott converted the turbine to a diesel engine and this engine still operates the mill today.

During the tour, Childers demonstrated how the mill operated using a scale model of the mill he built himself. The mill is operational, and Childers said they run it once each month. The mill has only been used to actually grind grain once since it was retired in 1963.

“A few years ago, we got an opportunity to grind some grain for Dogfish Head Brewery,” Childers said. “We poured 13 bags of Canadian barley through those roller mills, just one of them. All they wanted was the grain to be broken up into smaller pieces and they didn’t want to ground up real fine. They turned it into what they call DNA, which stood for Delaware Native Pale Ale. Everything in it had some connection to Delaware. Although the grain came from Canada, we ground it here.”

After the tour of the mill, the group boarded the van and returned to the museum. Delmarva Discovery Tours provides a gift bag to those who take tours as a thank you. In addition to offering the History/Eco-Tour, they also offer tours of wineries and breweries as well as other tours of the area. According to the company, farm tours are growing in popularity, and they are now offering an antiques trail tour as well. For more information about taking the “A River Runs Through It” tour, contact Delmarva Discovery Tours by calling 302-260-9008 or visiting www.delmarvadiscoverytours.com.