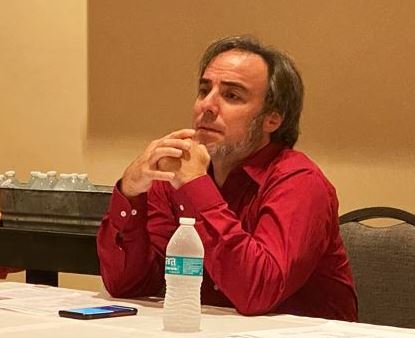 “We already have a department that is responsible for safeguarding our community, and that department is local law enforcement,” says Milford School Board member Adam Brownstein. (MilfordLive)

Milford School Board member Dr. Adam Brownstein calls a proposal to use federal forces to handle mask and vaccine protests “beyond troubling” and wants the board to make its voice heard in the national fray.

In a six-page letter sent to President Joe Biden on Sept. 29, the National School Boards Association likened the protests to “a form of domestic terrorism and hate crimes.” The letter calls for using the FBI, Homeland Security and U.S. Department of Justice to crack down on “threats of violence and acts of intimidation occurring across the nation.”

The letter prompted a rebuke from the Delaware School Boards Association on Oct. 6, saying the remarks do not reflect the position of the DSBA.

Brownstein said that a lack of clarification invites speculation. “Even more disturbing is the response by the Department of Justice’s intent to utilize the FBI to regulate people’s behavior at the local level is a massive overreach,” he said at Monday’s monthly meeting.

“We already have a department that is responsible for safeguarding our community, and that department is local law enforcement.” he said. “Threatening parents with the use of the FBI could easily result in the stifling of free speech.”

“It is my hope that my fellow school board members will agree to co-sign this letter and stand in solidarity with the [DSBA],” Brownstein said.

Protests have not yet reached a level the NSBA called concerning. Examples in the letter include a parent who was arrested in Illinois for aggravated battery and an individual yelling a Nazi salute in response to a mask mandate. School board disruptions in California, Florida and Georgia were also mentioned.

“These threats or actual acts of violence against our school districts are impacting the delivery of educational services to students and families, as many districts receive federal funds and subsidies for services to millions of students with disabilities… school safety activities, career and technical education, and more,” the letter states.

While the DSBA agrees that order must be maintained, free speech and ability for the community to address locally elected school board members are essential to governance.

“The bottom line is that the public education system in Delaware is established on the fundamental principle of local authority,” the state group wrote. “The ability for parents and members of the local community to address their school board is a fundamental aspect of local authority. The Delaware School Boards Association asserts that having a large number of attendees exercising their right to speak to the board is a good thing.”