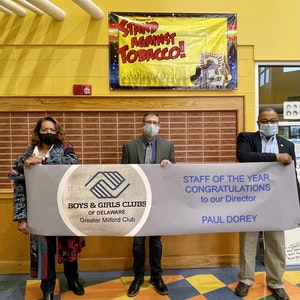 Recently, Paul B. Dorey, Jr., Executive Director of the Greater Milford Boys & Girls Club, was named the Joseph Dulin Staff of the Year, an award that is given each year based on nominations from employees within the organization. Dorey has been with the Milford Club for about a year and a half, although this year will mark his 14th anniversary with the Boys & Girls Club organization.

“I received a one-time payment of $500 and a paid day off as part of the award,” Dorey said. “I will also be able to attend the National Boys & Girls Clubs of America Convention. And of course, I have bragging rights!”

Dorey is a “homegrown Delawarean,” originally from Millsboro. He attended Sussex Central High School and graduated in 1999, joining the Air Force the following September where he served for six years as a Security Police officer.

“While in the Air Force, I attended the Community College of the Air Force as well as the University of Maryland European Campus,” Dorey said. “Once my term with the military was completed, I rejoined the civilian world and wound up applying and getting the position of Administrative Assistant at the Western Sussex Boys & Girls Club in Seaford, Delaware. Within the first year of employment, I was promoted to the Aquatic Director and Facility Manager. After several years, I was then promoted to Program Director. Around a year and a half ago, I applied for the Executive Director position that was open in Milford and was blessed to have been chosen for this position.”

Dorey explained he came to Milford after being invited to be a National Jeff Ellis and Associates Instructor Trainer while he was serving as the Aquatic Director in Seaford. This let him to assist all the aquatic programs in Delaware. He witnessed the construction of the Milford facility and had always admired the club and pool.

“The best part about this position is that I get to make sure that the staff have what they need, including training and supplies, to accomplish our goal,” Dorey said. “The best part about working for the clubs is seeing he long term impact on the children we serve. To this day, I get stopped in the stores by grown adults with kids who were once children in the program. To see the club members thriving as accomplished adults and having children of their own is the best pay anyone can receive, just to know you played a part in supporting them.”

The most challenging part of his job is keeping work at the office.

“When I get off work, my mind is constantly racing on what I can do to make a larger impact,” Dorey said. “My family is well aware of this and they, too, have embraced the mission of the organization.”

Robin Roberts, Chief of Staff for the Boys & Girls Club praised Dorey’s dedication to the organization.

“Throughout this very challenging year, he has been a stalwart, positive role model for students, showing them courtesy, respect and understanding in their efforts to manage their challenging academic schedules,” Roberts said. “He helped maintain a structured, positive learning environment to enhance the virtual learning supports provided by the Milford Club. Paul has a genuine interest and concern for the success of other clubs across the state. He does not hesitate to volunteer his assistance and encouragement with projects at other Club sites and often goes “above and beyond” to assist staff members, who are facing adversity. Efforts such as these resulted in his selection for Boys & Girls Club of Delaware’s “World Class Customer Service Award” earlier this year.”