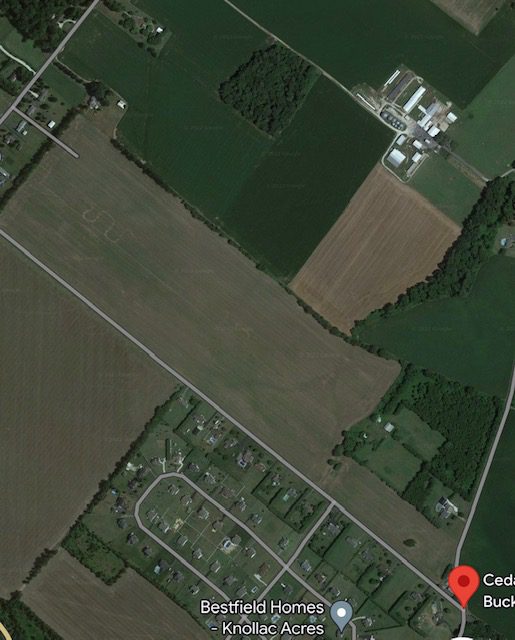 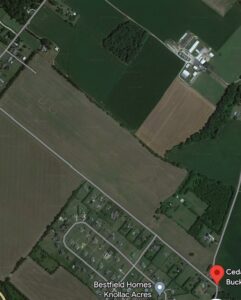 Red Cedar Farms, a 200 single-family home development, will be constructed on the corner of Cedar Neck and Bucks Road

At a recent meeting, Milford City Council approved a preliminary major subdivision plan for Red Cedar Farms which will be located on the corner of Bucks Road and Cedar Neck Road, across from the current Knollac Acres development. In addition to approving the development, council also approved a waiver of the block width requirement, allowing the developer to create three blocks that were more than the 275 foot requirement.

“The applicant shall also be responsible for right-of-way improvements either through direct construction of the entrance road widening and shared use path via contribution to the Southeast Milford Transportation Improvement District (TID), which is still being finalized,” Rob Pierce, City Planner, said. “If that is wrapped up in the next couple of months, the applicant would want to potentially participate through the TID rather than make the improvements themselves.”

Mike Reimann of Becker Morgan Group explained that the plot of land is zoned R2 which allows both single-family and duplex homes. The development also fit with the comprehensive plan for development of low-density residential in that area. The property does not include a floodplain and there are no wetlands on the property. It is adjacent to land that is zoned agricultural land preservation. The city also approved the design and installation of casing that would bring utilities to the area. The plan called for 200 single family lots that are just under one-third of an acre while the code called for lots at a minimum of 8,000 square feet. This would mean the lots are actually larger than what was called for in city code.

“We do have significant open space,” Reimann said. “Your code requires 25 percent open space and we actually propose an open space with some significant pedestrian connectivity sidewalks on both sides of the road as well as interconnecting portions of the development with open spaces. There will also be a shared use path along Bucks Road and Cedar Neck Road. These are relatively standard requirements of DelDOT and would be implemented here either using the TIP or directly.”

Access to the development would be from Bucks Road with alignment with an entrance to Knollac Acres. The central open space would include a pool and clubhouse with a boulevard style entrance that would include landscaping. The property drains to the east and there is a plan for a central pond to collect stormwater. The developer will continue to work with DNREC to create property stormwater design. The request for longer blocks was to accommodate stormwater ponds and to allow for additional open space in the development.

“There was some concern and I know Mr. Webb is here and we appreciate his comments,” Reimann said. “There were some concerns about being next to ag land use and I get he is a farmer. He’s out there doing his job. There’s going to be dust and there’s going to be things in his activities out there early in the morning. It is his job, and he wants everybody to understand that. There’ll be documentation on the plans and in the governing documents so that it’s known by the folks who are buying homes that Mr. Webb will be farming.”

Another property will be surrounded by the new development and the developer agreed to add additional landscaping around that property as an additional buffer. Councilman Jason James asked if one entrance was suitable for a development of that size and Reimann explained that a traffic analysis indicated it would. There would be turn lanes added for safety as well. Councilman Andy Fulton asked if the ponds would have fountains and Reimann stated that they would. Councilman Fulton also asked if the ponds could be utilized by the fire company to which Reimann stated that it was possible that could be incorporated.

“I was wondering if the residents of this community will have other amenities,” Councilman Brian Baer asked. “I’ve noticed some other amenities at some of Schell’s other neighborhoods like dog parks, pickleball courts and tennis.” Reimann stated he was not sure if those would be included but there would be a pool, lounge area, playground and walking paths.

Tim Green of Schell Brothers explained that it was too early for them to determine what amenities would benefit the development. Normally, Schell Brothers reviews other communities in the area to see what is offered but since there were very few developments in this area, they had not made those decisions. He explained that pickleball was “all the rage” now and that it was possible a court could be included. Councilman Dan Marabello asked if the homes would have basements. Reimann explained that groundwater would determine the existence of basements and they don’t have all that information at the present time.

“I am concerned about the overdevelopment of this area and whether all growth is good,’ Lucius Webb, the farmer who owned the agricultural land adjacent to the development, said during a public hearing. “I just do not want Milford to be the pariah that Lewes has become where we have one Stepford home community after another. And you really don’t have much of a jewel of a community where you have to fight traffic upon traffic to get to the center of town. It’s a real challenge.”

Webb continued that he grew up on the farm where he now lives, reminding council it has been a family-owned farm for six generations. The Webb family has been in Sussex County since the 1600s. He reminded Schell Brothers that backing lot lines up to beautiful open land would allow the developer to charge premiums of between $40,000 and $100,000 for those lots, something the farmer does not benefit from. He also pointed out that a farmer is not required to maintain property in a pristine way and that a pig farm could be created on the agricultural land which would reduce the value of the premium lots.

“I traveled this road as a kid in a school bus and also on my horse,” Webb said. “They were dirt roads, they’re old Crown roads. I think you need to take into account the impact it is going to have on the greater community there. You have a lot of people who bicycle in that area. They’re hardly passable on level as they are and should have been upgraded for traffic many years ago.”

Howard Webb, the older brother of Lucius, agreed with the traffic concerns. He asked that a hedgerow be added to the landscaping in order to create an additional buffer between the farm and the development. Ronald Esperson stated that with 200 homes, there could be as many as 400 cars traveling on a road that was already too narrow.

“I’m very familiar with the area in front of my home,” Raymond Hendrick said. “I want to thank Schell Brothers for acknowledging some of the comments I made last week. One of the comments this evening is they are going to remove a great deal of the vegetation I see every morning when I go to my mailbox, the biodiversity of the area. I’ve hiked through it. I’ve never trespassed but never found anyone I could talk to who would deny me access. I would like to ask that when they do the landscaping proposal, they use native Delaware trees and shrubs, not Leland spruce or cypress trees or burning bushes and Bradford pears. There are a lot of oak and maple, red bud and flowering dogwood. So, I hope you would keep that in consideration when planning.”

There was a question about what would happen to the cemetery plot on the property. Reimann answered several of the questions proposed by the public during the hearing.

“Bucks Road is going to end up being widened one way or another,” Reimann said. “There are two paths that will proceed. One is the TID path where DelDOT will do the project themselves. This development will be required to pay fees into that project ot help pay for it. The other path is for the developer to simply do it themselves as a requirement of the entrance plan approval by DelDOT.” Reimann also explained that there was a plan for extensive landscaping as well using native vegetation and trees.

City Solicitor David Rutt asked about the cemetery on the land.

“We’re unaware of it,” Reimann said. “There are state laws governing burial plots that are unmarked or what have you. We are not aware of that. It was not a comment that came up in any of the research through PLUS in their databases. But, if there was something encountered, there are state laws that govern the process you need to go through for that, but we are not aware of them on this property.”

After the public hearing was closed, Rutt explained that because the land was zoned R2, if the development meets all the criteria under the code, council is required under Delaware law to approve it. The only deviation was the block length which had already been approved by the Board of Adjustments.

“I vote yes for approval,” Councilman Marabello said during a roll call vote. “I know it’s going to be a big change for that area. I can understand people’s feelings there. But being that it is $2, it could have been a lot more dense. I sort of appreciate that it is down to this limit. I do understand your feelings, but it could be a lot worse.”

Councilman Mike Boyle agreed, stating that he was living the same thing as a farm right behind his home could eventually become another development. He voted yes because the development met all the requirements of the code.

“The density factor is a major factor in this consideration,” Councilman Fulton said. “I know you’d like open land out there. I know I looked out there and I was going to purchase out there when I first came to this area. Unfortunately, when someone finally does put their land up for sale, it goes up for sale. They have a right to sell their land to whomever they find to sell it. It was zoned R2 which means density could be twice as heavy as what this is saying right now. And that means traffic is reduced by 50 percent already. So, with the changes to Bucks Road, I do know that road needs a lot of development, so I feel for what you’re going to lose.”

Councilman Todd Culotta also voted to approve the plan believing that the TID traffic plan will accommodate a lot of the concerns. Councilwoman Nirmala Samaroo and Councilman Baer also voted yes based on Planning Commission approval. Councilman James voted yes but hoped the final plan would have an additional entrance.

“I vote yes, based on Planning and Zoning and it meets the code,” Councilwoman Katrina Wilson said. “They are complying with our ordinance. I also appreciate the developers reaching out to the neighbors and already trying to establish that good neighbor that we all need. So, hopefully that will continue and we will have a beautiful, nice project out there.