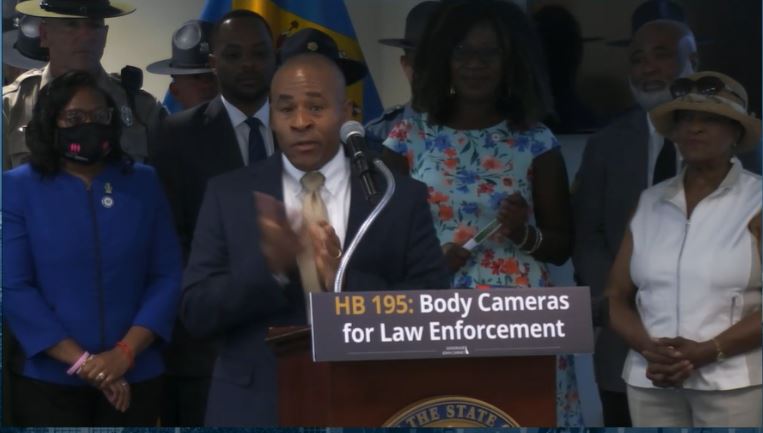 Nate McQueen, secretary of the Delaware Department of Safety, leads applause for police officers during a ceremony that made police body cameras a state law.

Delaware has become the eighth state in the country to mandate the statewide use of body cameras by police officers.

Gov. John Carney was joined by members of the House Black Caucus, the state Police Chiefs Association and the Fraternal Order of Police when he signed House Bill 195 Wednesday.

HB 195 requires police officers and some employees of the Department of Correction and Department of Services for Children, Youth and Their Families to wear cameras and record their interactions with the public.

The bill requires state agencies to implement the state body-worn camera program through the procurement of cameras, development of a data storage program, and provision of necessary personnel as funding is available, according to the bill’s Senate sponsor, Sen. Darius Brown, D-Wilmington.

Rules for the use of body cameras will be established by the Council on Police Training.

The bill garnered unanimous support in both the House and Senate when it was passed in June, largely because the legislation had the backing of Delaware’s prominent police groups, including the Police Chiefs Council and the Fraternal Order of Police.

Carney’s budget, which the legislature authorized in June, allocates $5.2 million to be spent on the statewide implementation of body cameras.

The bulk of the expense goes to data storage and review capabilities.

Patrick Ogden, who is the chief of the University of Delaware Police Department and heads up the Delaware Police Chiefs Council said in a statement at the time of the bill’s passage that all of Delaware’s police chiefs are committed to implementing the policy.

“They are an invaluable evidentiary tool in prosecuting criminal cases, as well as resolving internal affairs investigations and improving police performance, when utilized for supervisory review and training purposes,” Ogden said.

Before signing the bill, Carney said that this bill will help create a trusting relationship between police officers and the communities they serve — particularly communities of color.

“I know this will make a difference,” Carney said. “Most importantly, in improving that level of trust, for all of us to be safe and for law enforcement to be successful.”

“I don’t want officers having stories told about them that aren’t true,” Dorsey Walker said.

Sen. Brown said that this bill was the hallmark of the House Black Caucus’s “Justice for All” agenda which was introduced last June in light of the George Floyd shooting in Minneapolis.

Brown lauded the law enforcement officers who are “willing to run toward danger” while “many of us run away from it.”

Nate McQueen, the state’s secretary of the Department of Safety and Homeland Security, said his agency would “work with all of our partners to fully implement the statewide body-worn camera program and ensure safety and security in all of Delaware’s communities.”

She also thanked Delaware’s nearly 50 police chiefs, all of whom she says support the policy.

Laura Giles, chief of the Elsmere Police Department, said that her department would not have been able to implement body-worn cameras without this bill and the state funds that come along with it.

“This is something that law enforcement has wanted for many years,” Giles said. “I can tell you that even being from a small department this was cost-prohibitive for us.”

Carney dedicated the signing of the bill to Cpl. Stephen Ballard of the Delaware State Police and Lt. Steven Floyd of the Department of Corrections, both of whom were killed in the line of duty in 2017.

The bill was signed in the same room where the killings of the two law enforcement officers were announced in 2017.