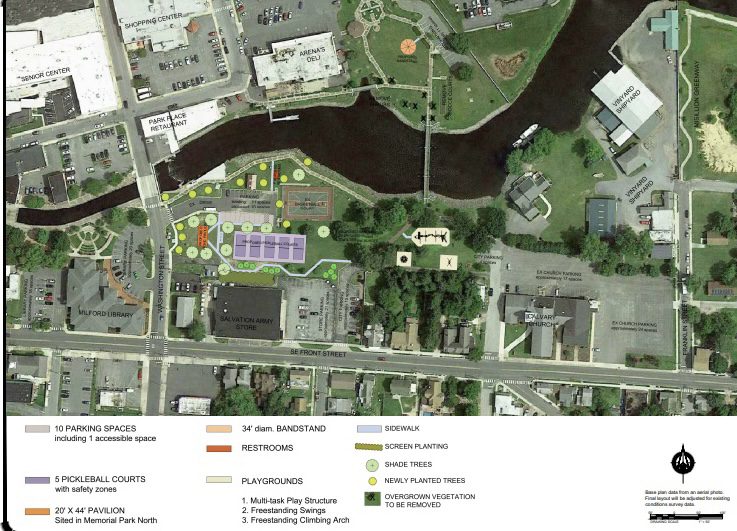 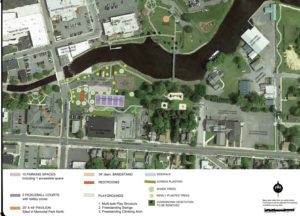 At a recent meeting, Milford City Council approved a request from Brad Dennehy, Director of Parks and Recreation, to move forward with the bidding process for several downtown recreational projects. The projects include pickleball courts, a pavilion and a playground in the area of the Milford Riverwalk as well as in Memorial Park.

“We are in the process of developing a concept plan for Memorial Park,” Dennehy said. “I want to caveat that and say this is a concept plan. So, a lot of the items in this have been identified as part of our Capital Improvement Plan as well as through public input. Nothing is set in stone at this stage. However, we have got funding. So, what we have funding for at the state level and with approved funds from the council is a playground and pickleball courts, and potentially a future picnic pavilion.” A possible restroom is also planned for Memorial Park.

As for Bicentennial Park and the Riverwalk, Dennehy stated that plans were underway for a future bandstand or stage. The ideas for the recreational projects came from the Parks and Recreation Advisory Board as well as public input sessions. The Memorial Park playground would be placed in the grass area on the south side of the bridge and the pickleball courts would be installed behind the basketball courts.

“In terms of other stuff, we will be coming back and seeking more input from the public and council,” Dennehy said. “DMI has put in for funding for a restroom, but we don’t know at this stage if that’ll be funded or not. I think the idea is we don’t just want to put a playground downtown. We don’t just want to put a pickleball court in Memorial Park. We want a cohesive plan to know where we’re trying to go. The idea is we have a pavilion people can come down and have a nice picnic on Sunday. The kids can play on the basketball court, they can be on the playground, they can play pickleball.”

Parks and Recreation has received funding toward several of the projects, including a $200,000 grant for the playground and $175,000 from DNREC to be used for both the pickleball courts and playground. City Council has also earmarked funds for both projects. Dennehy explained that the playground would be in the style of a ship as an acknowledgement to the city’s rich shipbuilding history. It will have slides, swing sets and climbing structures. Dennehy also stated that there seemed to be a definite need for pickleball courts based on public input.

“I really like the concept, the idea of play,” Councilman Todd Culotta said. “I’m really excited about that with a two-year-old. About the pickleball courts, which I think are wonderful as it’s a very popular sport and people are looking for it everywhere, is there any way we can incorporate tennis courts in there for the traditionalists?”

Dennehy explained that several pickleball players and representatives from a Sussex County pickleball association spoke to the advisory board about the game. They indicated that the courts should only be lined for pickleball as different lining could make the game confusing. Councilman Culotta stated that he wasn’t asking to have a dual-purpose court but wondered if tennis courts could be an additional recreational project in the park.

“We don’t have tennis courts in Milford,” Councilman Culotta said. “The only place we have them is at the high school and you can’t use them while school is in session.” Dennehy offered to look into the possibility as there had been requests for tennis courts. He also pointed out that he had a son on the tennis team who would be willing to play at any time.

Mayor Archie Campbell stated that people often asked him about a skateboard park, mentioning that there was one in Milford some years ago.

“We did have one on that Washington Street site years ago,” Dennehy said. “It was a ramp system which became problematic for whatever reason, but that was a little before my time at Parks and Rec, so I can’t speak to specifics. But the ramp did get dismantled and was not replaced. I’ve had more probably conversations in the last six months about skateboards, some sort of skateboard park. I am not sure whether downtown is the best place for it. My personal feeling is maybe by the BMX track where we’ve got additional city owned land.”

Councilman Brian Baer questioned the location of the picnic pavilion, mentioning that in a meeting held the week before, Dennehy commented that the pavilion had been moved in the plan.

“We actually just got the latest rendering on Friday, so it was too late to get it into the packet, but you are correct,” Dennehy said. “The pavilion to the west of the pickleball courts will be moved to the other side of the basketball court, closer to where the playground is. That immediately jumped out, I think, when Mark and Rob looked at it and, as parents, the first thing we thought was we are having a picnic and want the kids to be in the line of sight where they can jump on the playground. No one wants to be in the picnic pavilion and running up and down the park trying to find their kids.”

Councilman Baer also liked the idea of adding a few tennis courts to the park and asked about a potential water feature that had been included in other plans.

“There has been a splash pond proposed at several locations over the last few years,” Dennehy said. “I don’t think we ever identified exactly where that was going to end up, but again, you know this is very much a concept plan. If that’s something council feels is desirable and there is public support for it, it could be something we look into moving forward.”