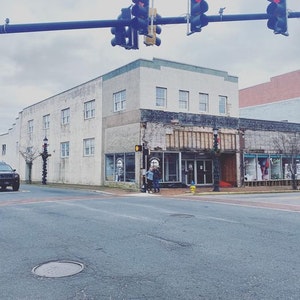 Zack and Marissa King, owners of EasySpeak, recently announced their purchase of the Penney Square building

The owners of EasySpeak, Zack and Marissa King, recently announced that they had purchased the Penney Square building in downtown Milford. The building formerly housed JCPenney but was converted into small retail stores many years ago.

“We love Milford and have made it our home,” Mrs. King said. “We want to improve and grow Milford anyway we can, and we thought the Penney Square building would be a great start. It definitely needs some TLC and we are ready to do just that.”

Mrs. King stated that the current EasySpeak location on Route 14 would not be relocated to the new location. The couple loves where EasySpeak is located now and, as much as the love the downtown area, they don’t feel that would be a good location as a “home base” for the distillery. The façade of the Penney Square building is under repair currently, but Mrs. King explained that additional upgrades are planned.

“We have some paperwork to do first, but as soon as renovations are approved, we will be working endlessly to make Penney Square another attractive building in downtown Milford,” Mrs. King said. “We have obtained historical designation for the building from the Milford Museum Commission and are currently working on an application for the state as well.”

The corner where Penney Square stands has been the location for several important businesses in Milford. Photos from the Milford Museum show that the National Hotel stood on this corner in 1828 although receipts from 1870 indicate that the name of the hotel was eventually changed to the Milford Hotel.

On October 11, 1929, JCPenney opened a store on the property, making JCPenney present in all 48 states at the time. The store was very popular with Milford shoppers, but in the late 1980s, JCPenney decided to close smaller stores. In the late-1980s, the building was purchased by Goldey Beacom College and satellite classes were held there for several years. It was purchased by the DeMartin’s not long after it was vacated by Goldey Beacom.

The King’s opened EasySpeak opened in 2017 as a distillery and restaurant. The concept, created by Mr. King, was to provide unique spirits a the location as well as pub-style food. The distillery and restaurant was designed from the bottom up by the Kings, from color scheme to the industrial-style decor. They have expanded their outdoor seating with a firepit, grass area for games and a sandy area with swings and hammocks. They also opened a game room for patrons.

Mrs. King stated that all tenants currently in the Penney Square building would remain and that they hope they can bring a fresh vision to downtown Milford.