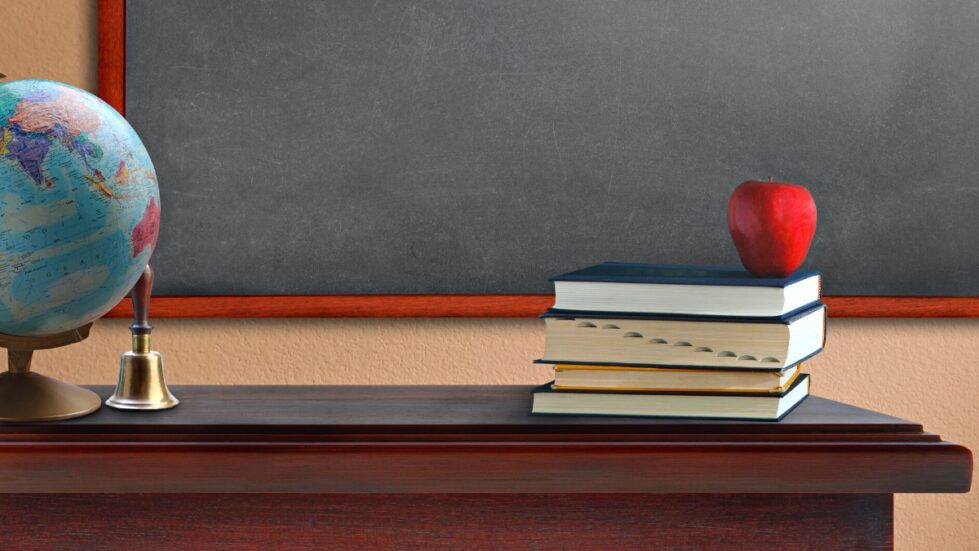 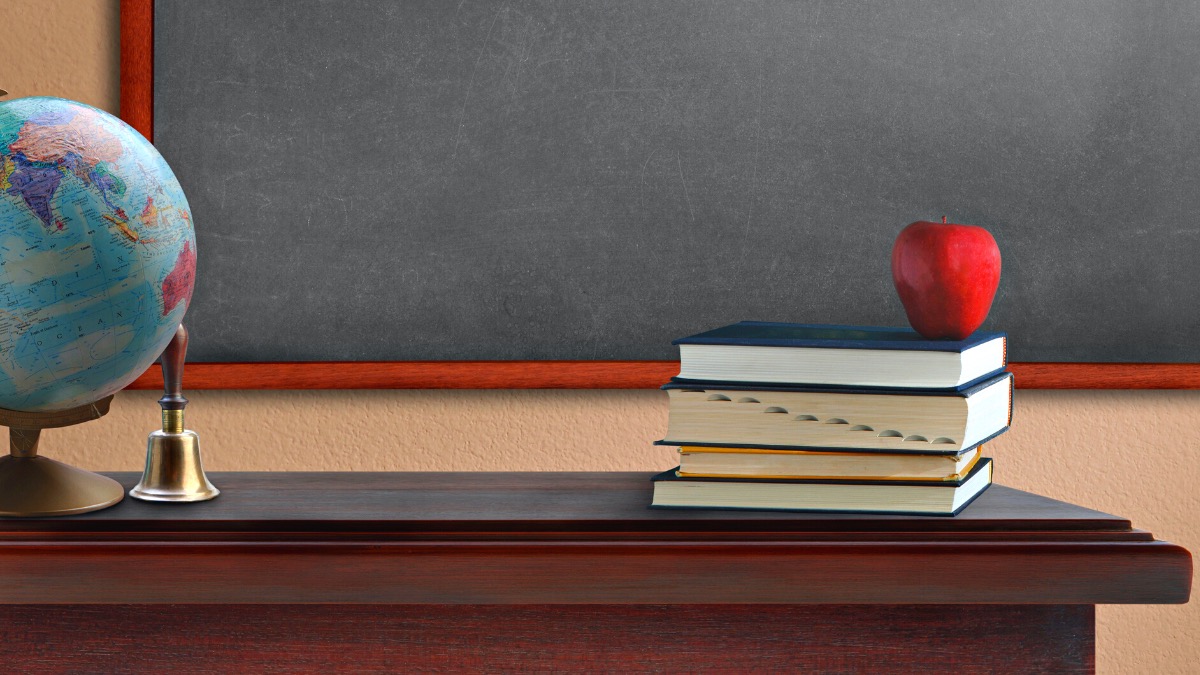 Delaware’s teacher union proposed a new salary schedule Monday that includes a base pay of $60,000.

The meeting was the compensation committee’s third after being created by the General Assembly to examine teacher shortages and develop a plan to compete with neighboring states’ salaries.

The DSEA’s proposed pay schedule would change the number of pay steps to 10, down from the current 17.

That means teachers would reach their maximum pay after 10 years of employment, unless they pursue higher education, Taschner said.

Career earnings will be significantly increased, Taschner said, because teachers will be making more money at the beginning of their careers. That may enable them to pursue additional degrees, opening options for additional raises.

“By condensing that salary schedule, it absolutely increases the career earnings across the board of anybody in the system, whether you’re a teacher or administrator,” said committee member and educator David Kohen.

Still, he wants to keep the options open and look for other possible pay scale recommendations.

“DSEA’s plan addresses the committee’s focus on our neighboring states that are offering compensation to educators significantly above what we are doing here in Delaware,” Pettyjohn said. “I just want to see what other ideas are possibly out there.”

Here’s a look at the current salary schedule for teachers in Delaware, and the one proposed by the DSEA:

“We are not trying to roll this out all in one big fell swoop, but we’re actually talking about rolling it out over three years,” Taschner said.

The state of Delaware is responsible for about 70% of teacher salaries in the state, he said, pointing out that all numbers in DSEA’s proposal Monday referred to the state’s share.

The DSEA says current teachers will get raises, too. Individual raises would range from 1% to 20.25%, depending on where the teacher is on the pay scale.

During year two of the proposed plan, the state would pony up an additional $45 million to bring the annual teacher salary bill to $596 million while increasing its share of the base pay to $40,000. Existing teachers would see rises of 9% to 30% of their current salary.

The final year of rollout would cost the state $29.5 million for a total teacher salary bill of  $625.5 million and would increase the state’s share of a teacher’s starting salary to $42,000. Across the state, teachers would make between 17% and 36.5% more than the current pay schedule calls for. 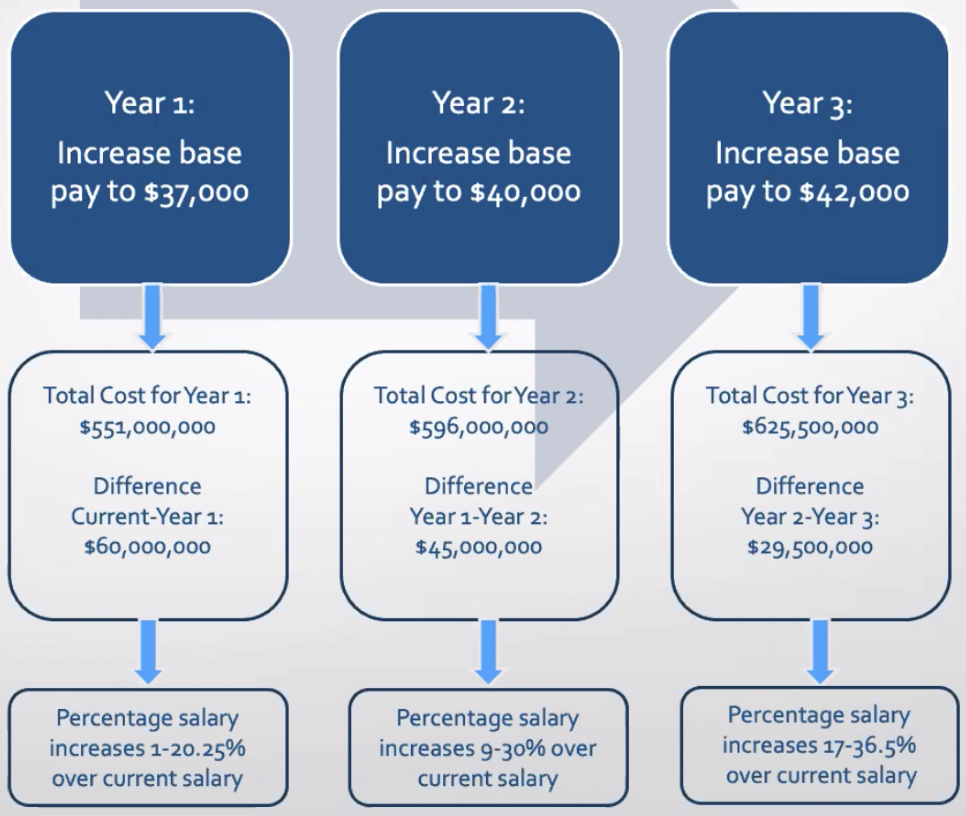 “Step increases average around $10.5 million, and we also know that we’ve experienced a 1% to 2% general salary increase the last six to seven years,” Neubauer said.

“That’s about $8.5 million. So you total those and it puts you somewhere between $19 and $20 million that would go into increasing teacher salaries if we were just to continue the same system we currently have.”

Rep. Kim Williams, D-Stanton, urged the committee to prioritize increasing pay for support staff like custodians and cafeteria workers, who she says are “definitely underpaid.”

Sen. Laura Sturgeon, D-Hockessin, a former teacher, said support positions are vital to the success of the school, but wanted the committee to remember why it was formed in the first place.

“One of the main reasons we are doing this is because of a shortage, and so I think it would be helpful to know if we also have a shortage in those areas,” she said. “Do we have a shortage of support staff, cafeteria workers, custodial workers?

“If we do, then certainly we should consider them, but if our goal is recruitment and retention, and if we’re not having trouble in that area, it’s a little less important that we focus on it.”

Rep. Mike Smith, R-Pike Creek, said he believes shortages exist in all areas of education, and support staff and school administrators shouldn’t be left out of the pay raises.

Education Secretary Mark Holodick said he isn’t aware of any shortages among support workers, but that the Department of Education will seek data on the issue.

The committee has until Nov. 15 2023 to submit its final report and recommendations.