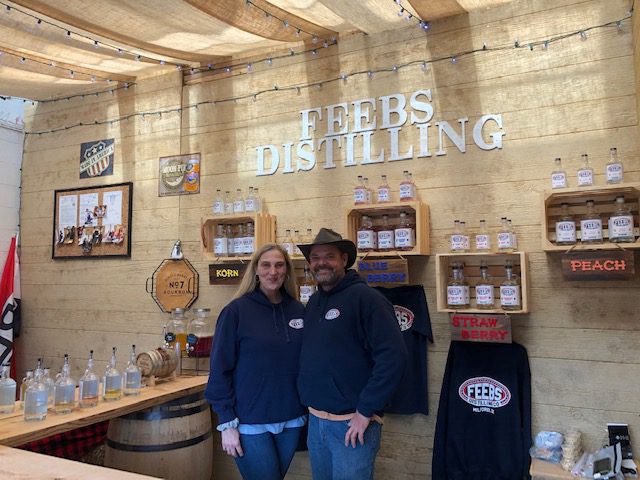 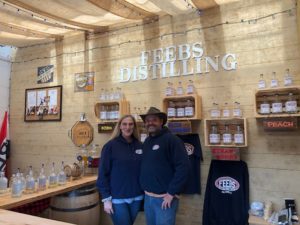 Eric Fibelkorn began distilling his own liquor over nine years ago after being unable to find bourbon or whiskey that did not give him heartburn. After researching the distilling process, he decided he could make his own rather than spend money on liquor that did not agree with him.

“I was spending $200 and $300 a bottle on high-end bourbon and whiskey trying to find what would work for me,” Fibelkorn said. “I built a still in my garage and started making small batches. The first few batches I tossed out because they were awful, so I started tweaking the recipe. Once I got the base right, I started adding fruit. After trial and error, I came up with six different recipes that we are using today.”

About three years ago, Fibelkorn started dating Stacey Arnold. One Saturday, she asked him what they were doing that night and he responded that he would be working on the still in his garage. At first, she didn’t believe him until she showed up at his house and found he was telling the truth.

“My response was, well, okay,” Arnold said. “He started talking to me about it and I saw how his eyes lit up. I knew this was his passion. We started talking about creating a distillery in Milford but it was really just talk as we were making the alcohol for our own consumption. Then, in 2017, I was diagnosed with cancer. I came through it and I told him that if we were going to do it, let’s do it. Life is just too short. So, the process began.”

Fibelkorn and Arnold were told they would never make money creating liquor with their method. Fibelkorn is insistent that all liquors created are made using the Tennessee method for making moonshine and only fresh, local fruit. For their peach brandy, they use 700 pounds of peaches. For their apple brandy, they hand cored every apple they used, a process that took them three days.

“We went to the city and we were told we could not run a business out of our location,” Arnold said. “I was surprised and explained that there was a rental place near us, a daycare center, a beauty salon. How could it be that we could not open a business here? Rob was great. He explained that previous city officials had turned a blind eye to what the code required but he was trying to fix all of that. I cannot say enough about how the city helped us. The actually changed the code for us so we would be operating here legally. It has been a long process but we have had so much support along the way.”

Feeb’s Distilling, whose name is based on Fibelkorn’s nickname, gets all their fruit from Fifer’s Orchard and all of their grain is sourced from Laurel. They are the fifth distillery in the state of Delaware and the first female-owned and operated distillery in the state. The couple does all the work themselves nights and weekends, using paychecks from day jobs to support the fledgling brewery. Although most of the liquors are classified as brandy by the federal government due to their distilling process and chemical makeup, the couple views them as moonshine.

“We travelled to small distilleries in Tennessee to determine what we wanted and what we did not,” Arnold said. “We learned a lot talking to people who were actually in this business. Currently, we have whiskey and bourbon aging in barrels that will be ready in September. This is not a speedy process and it is hard for me because I am an instant gratification person. I have had to learn some patience in the process.” Fibelkorn said that he has made several small batches of the whiskey and bourbon that he has given away to friends and family. The response has been extremely favorable with many saying they did not believe he had made the product himself.

Feebs Distilling is located at 733 McColley Street in an old warehouse owned by Penco. The couple rents the 1,762 square feet of space for the distilling process as well as the small tasting room which they hope to expand as business grows.

“We have had nothing but positive feedback from the businesses and residences around us,” Fibelkorn said. “We have these big overhead doors we can roll up when the weather is warm and we hope to add outdoor seating at some point. We have been approached by bands who want to play, car shows, cornhole tournaments and so much more to help us bring in business. Every day, I wake up and cannot believe I am actually doing this. We are living the American dream.

Feebs Distilling is open Saturday and Sunday from 12 Noon until 5 PM. Tastings are designed to take around half an hour but Arnold said that as people come in, they find them staying longer to chat with each other.